Officials said the crash happened around 7 p.m. in northeast Albuquerque.

According to police, 19-year-old Casino Salazar was speeding down Montgomery Boulevard when he crashed into a silver GMC – killing the driver.

Officials said all four passengers in the GMC were taken to the hospital, including Salazar.

Police said Salazar was slurring his speech and had bloodshot eyes when they interviewed him, but he denied consuming alcohol and driving the vehicle.

Officers found several containers of liquor – as well as firearms and marijuana – in his vehicle after the crash.

The victim of the crash has been identified by his family as 58-year-old Kevin Barton.

"My soul mate, my love, was taken and never came home,” said his wife Melanie Garcia.

Barton’s family says he was a loving husband, father, and grandfather. He was about to retire and had a second grandchild on the way.

"He was a single dad, two daughters, raised us the best way he could, sports, school, just the best childhood we could have asked for," said his daughter, Chelsey Barton.

"Prior to the accident we spent all day golfing and it’s just hard to believe. I’m so shook because I was just with him all day and his last day was spent doing what he loved which is golfing," said his other daughter, Kristen Barton.

The crash happened just a few blocks from Barton’s home. He was on his way home after picking up dinner.

His three dogs were in the SUV with him. Two are being treated by veterinarians. But the third dog, Otis, is now missing after witnesses took him at the scene and said they would bring him to a vet.

"We called all the vets. We can’t find Otis," said Melanie.

Salazar is now facing multiple charges, including homicide by vehicle. Salazar has had similar run-ins with the law. Last Tuesday he was arrested in Roswell for causing another car crash.

Police believe alcohol was also a factor in that crash.

If you would like to donate to the family’s funeral services, a memorial Facebook page has now been set up.

Amazing update! The family of Kevin Barton, who was killed by a suspected drunk driver Saturday, found their dog, Otis, who was in the SUV and has been missing since the crash. The family sent me this video of Kevin’s wife, Melanie, being reunited with Otis this morning. @KOB4 pic.twitter.com/ogopVuXUMi 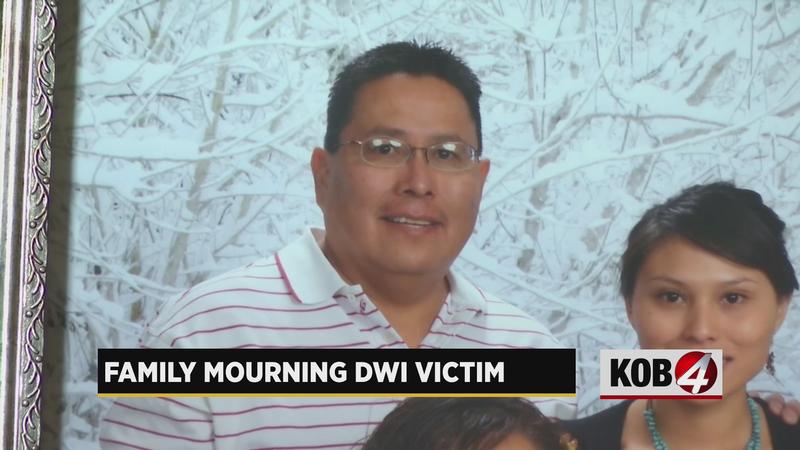