ALBUQUERQUE, N.M. – Each of the Twin Towers were 110 stories tall. Today, to honor the first responders who died 20 years ago, local firefighters went up and down 110 flights of stairs in downtown Albuquerque.

Over 50 firefighters put on their bunker gear, from their helmets, to their boots, and even an oxygen tank on their back, and then they climbed to the top of the tallest building downtown.

First responders gathered at Civic Plaza at 8:46 a.m. (the time the first plane hit the first tower) Saturday morning, as an honor band played. As they stood in line, an announcement came over the loudspeaker.

“As you make the 110-story climb that so many started but were not able to finish, take time to remember the sacrifices they made.”

Firefighters marched down the street from Civic Plaza to the plaza building, and on their way to the stairs they remembered why they are here. 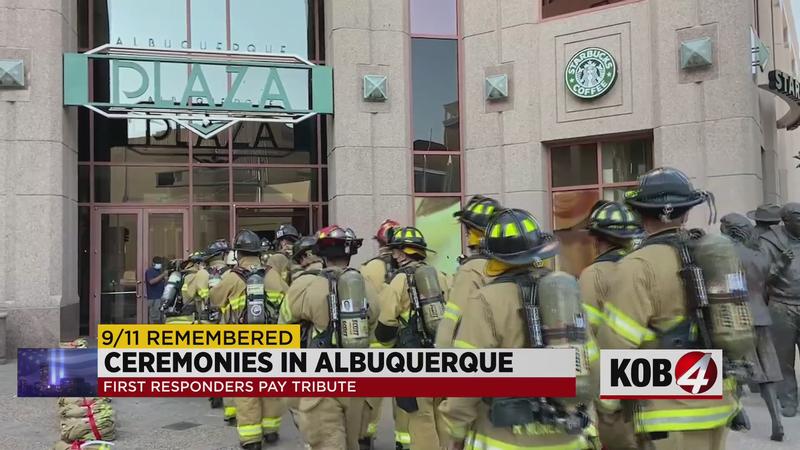 “It’s personal those 343 firefighters that died on 911 they walked up those World Trade Center tower stairs, and they never came back and that’s why we do it we do it to never forget,” said Tom Ruiz, AFT public information officer.

Twenty-two flights of stairs to the top, a trip marked by a plaque that commemorates that fateful day, men and women made the trip 5 times up and down a crowed stair well.

“This is something honestly that you can be in shape for but not prepared for, it’s very hard to get prepared to do this, a lot of guys that day had to take the stairs up as high as they went was 78 floors,” said AFT Lieutenant Chuck Cogburn.

As they go all the way up and back down they carry more than just their gear, everyone holds a photo.

“And I have Thomas Farino from engine 26,” added Adam Cogburn, first year firefighter.

And everyone carries a different reason for making the climb.

“It’s cool to carry on the tradition the fire department is a brotherhood passed down from generation to generation, so it’s kinda cool to keep that up,” said Adam Cogburn.

Adam is a 3rd generation firefighter and this is his first year making the memorial stair climb, and going up those stair is all the more meaningful as he does it alongside his dad.

“He started this when I was little little so it’s cool to see how big it’s gotten and how much everything has grown and continuing to look forward to how everything grows,” Adam said.

Chuck has been making the climb for 19 years, but this year is special for more than one reason.

“There we quite a few sets of fathers and sons that actually died in the towners that day,” Chuck said looking over at his son, “This is a very proud moment, it really is a traditional job it really is generation after generation who have served their city.”

As they make their 5th trip up the stairs Saturday, they plan to continue to make the climb together every year.