Family of man killed while in police custody sues APD

ALBUQUERQUE, N.M. – Since the DOJ came in, the Albuquerque Police Department has vowed to make meaningful changes. A new lawsuit alleges APD is not doing enough.

It points to a recent in-custody death earlier this year. The suit alleges it should never have happened.

APD actually released a video earlier this year, showing their interaction with 43-year-old Danny White. His family called for help while he was suffering a mental health episode, but White died after being placed in cuffs.

“The family wants to create awareness for other families as well,” said Frances Crockett Carpenter, one of the attorneys representing the White family. “This is happening, it continues to happen and they want to hold APD accountable.”

Frances Crockett Carpenter is one of a team of attorneys now representing Danny White’s family in a wrongful death lawsuit aimed at APD, the City of Albuquerque and the officers and staff involved.

She said prior to that response in April, White was known to the department. He suffered from a neurological disease, Huntington’s disease.

According to documents, on April 4, his family called for help – specifically, from a trained officer in crisis intervention.

According to documents, the responding officers escalated the interaction, eventually placing White on his stomach in cuffs. He was gasping for air asking the officers to "stop," according to court documents.

“What OMI opined was that Danny White who was 43-years-old died of sudden cardiac arrest during prone positioning and arrest and restraint,” Crockett Carpenter said. “We don’t believe using any force on Danny, on that day was necessary.”

Now, she said, the family is left coping with an unnecessary tragedy, alleging APD and the city "have systematically deprived Albuquerque’s mentally ill of their constitutional civil liberties."

APD said one officer was found to have violated policy in this case and was educated about the policy as a result. A spokesperson said there were no other discipline or policy violations, nor any criminal liability.

As for the lawsuit, the city will respond in court. 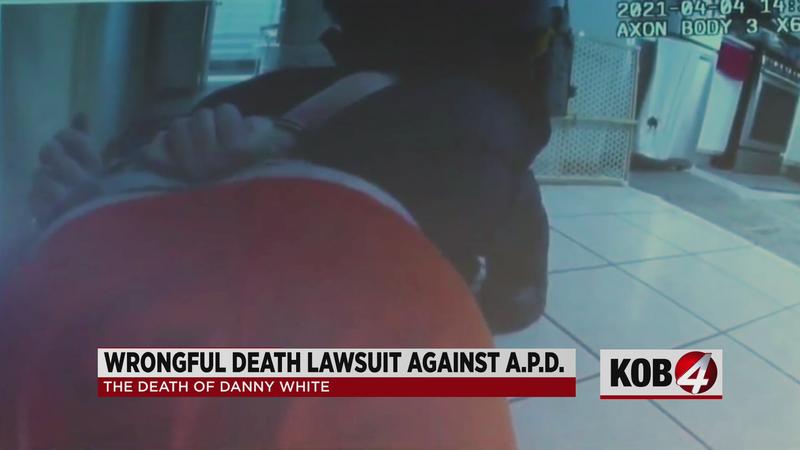