ALBUQUERQUE, N.M. – A family’s search for their missing loved one is continuing more than a month after they say she was last seen in Albuquerque.

The family of Christina Quintana is seeking the public’s help in gathering information regarding the 31-year-old’s whereabouts and are even offering a reward for any information that may bring her home.

Christina Quintana’s sister, Jordon Rousseau, last saw Christina, Dec. 20, 2021, at a Walmart on Carlisle Boulevard. Rousseau describes it as a normal day for Christina and remembers she was happy when she saw her.

"She came up and gave me a hug because we hadn’t seen each other in a couple of years," Rousseau said.

They spent time catching up before, Rousseau says, Christina walked off in a different direction. For Rousseau, she didn’t know that this was going to be the last time anyone saw or heard from the 31-year-old. 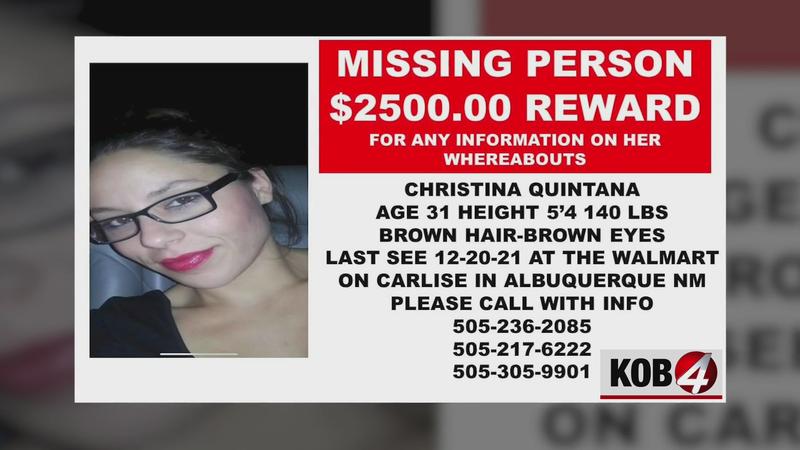 "Christina doesn’t go without talking to her family," Rousseau stated. "She’s never been that type of person.

Rousseau decide to file a missing person report with Albuquerque police last week. However, she says the officer did not ask for a photo.

"They don’t even know what she looks like," Rousseau said. "They have her date of birth, her weight, her height and her hair color – and that’s it."

Now, Christina’s family is taking matters into their own hands. They have shared photos of her on social media and are offering a $2500 reward to anyone who can help bring her home.

"We’ve been getting reports that she was been seen down in the War Zone," Rousseau said. "I’ve drove down there and handed out flyers, I’ve shown pictures around."

"There have been some, not positive, but pretty positive sightings in that area," added Maria Ortega, Christina’s mother.

Christina’s mother says they have also received tips that Christina’s life may be in danger and that she is being held against her will.

"If she’s being held against her will, we’re gonna do whatever we can to find you – and we love you and we miss you," Rousseau said.

If you have any information regarding Christina Quintana’s whereabouts, her family asks that you reach out to the numbers on the flyer or call 242-COPS if you have any tips to share with Albuquerque police.