ALBUQUERQUE, N.M.—The Albuquerque Academy Chargers hosted the Hope Christian High School Huskies Saturday afternoon. The football game was one of the first in the metro area since last year.

It was a moment for the athletes and their families that almost didn’t happen because of the foul play by the Coronavirus.

"We were very worried that his senior year was gonna come and go without any football, so we’re thrilled. We’re thrilled he was able to play this year,” said Sherri Hall, a Hope Christian High School parent.

"Losing an entire year was very difficult and especially with it being his senior year, it’s good that they are able to at least have a small taste of normalcy,” PJ Valencia Megginson, an Albuquerque Academy parent. 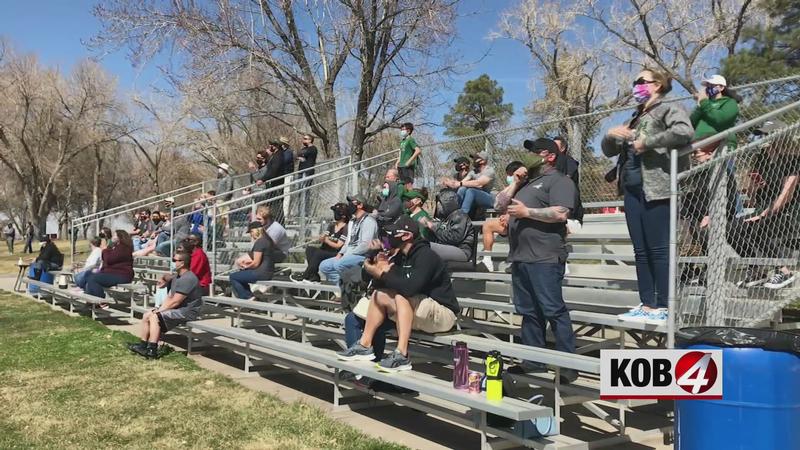 Fans planned to livestream the game, but state officials recently announced that fans were allowed to attend in person.

"It came all together in the end. I’m pretty excited to be here. I know they weren’t even going to allow fans until the last minute,” said Eric Anderson, an Albuquerque Academy Coach’s son.

The players were given two tickets each for family or friends. At Albuquerque Academy, spectators can be at outside at 25% capacity, which is about 200 people according to the athletic director.

People were required to social distance and wear their masks at all times. A security guard was reminding people to follow the rules.

“I’ll take it. I’ll take what I can get,” said Matthew Ports, a Hope Christian School parent.

“It’s way better than it would be over a computer because you can actually be here and see what’s happening,” said Kai, a coach’s daughter.

“Out of all the things that are on the computer, I’m thankful that this is actually in person and we actually get to be cheering. It’s such an honor,” said Adelyn, another coach’s daughter.

It wasn’t a touchdown for everyone though. One boy said he didn’t love football, and was only there because his mom and dad dragged him into it. But he was still supporting his big brother on the Huskies team.

In the end, the Huskies beat the Chargers 14-7.

But for most fans, the score didn’t matter.

“It doesn’t matter who wins. We’re all winners if we’re all just out here,” said Valencia Megginson.