FARMINGTON, N.M. – A Farmington woman is seeking answers after she was shot in the back July 3 while spending time with family.

Katelynn Sinclair arrived at the Farmington Sagebrush Church to watch a fireworks show with her family. When she exited her husband’s truck, however, something did not feel right.

“I had just gotten out of my husband‘s truck and walked around to hug my best friend," Sinclair recalled, "and then within 2-to-3 minutes upon arrival I had felt this really strong very uncomfortable pain in my back."

Sinclair and her family initially thought she had been hit by a stray firework. However, her husband discovered it was something else.

"He lifted up my shirt and when he lifted it up, there was a hole in my bra strap so he moved it away and then that’s when he revealed that there was a legit puncture hole in my shoulder," Sinclair said. "Unfortunately it was bleeding so he didn’t say anything more other than ‘We got to go.’” 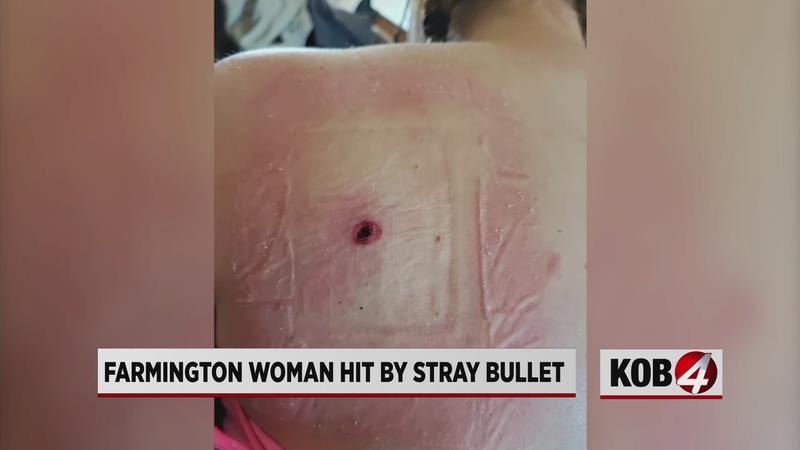 Sinclair and her husband went to the hospital where doctors found that she had been shot.

“There is a bullet fragment that went in through my back, bounced off my shoulder blade, went completely around my rib cage and made itself at home between my ribs and my pec muscle," Sinclair described.

Doctors did not remove the bullet because they were concerned it would cause more damage. However, Sinclair is planning to consult with a general surgeon in Durango to see what they can do.

Police are still seeking answers as surveillance footage did not reveal any evidence. Sinclair is also asking the public to help find the person who shot her.

“Somebody out there has got to know something," Sinclair demanded. "You know my family was close to losing me, I’m a mama, a wife and a daughter, I’m a best friend and I can’t imagine what they would be trying to do fighting for some sort of answer so finally I made the decision to come out because somebody out there knows.“

Even as the shooter remains at-large, Sinclair counts her blessings and is hopeful that the shooter will be found.

If you have any information regarding the shooting, contact the Farmington Police Department.