ALBUQUERQUE, N.M. – The FBI has released video footage of an unidentified man suspected of robbing three Albuquerque banks on Monday and Tuesday.

The video shows a robbery of the U.S. Eagle Federal Credit Union, on Coors near Montaño in Albuquerque, around 10:02 a.m. Tuesday.

The suspect is shown with his hand in his pocket as he walks toward the teller. He then takes off his bag, tosses it toward the teller and demands cash while brandishing a gun hidden in his waistband. Seconds later, after an exchange that took less than a minute, he exited the bank with money from the teller.

At around 10:34 a.m., the same person is suspected of entering the Bank of the West, at 4221 San Mateo Blvd NE, where he presented a note to a teller and successfully demanded money from the teller before leaving the bank.

The suspect is also accused of robbing the U.S. Bank, at 3620 Juan Tabo Blvd NE, Monday. 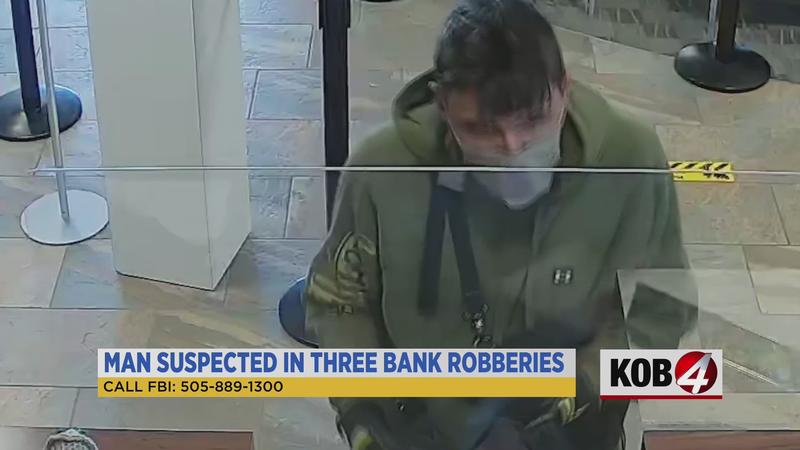 "Since the first of the year, we’ve had at least 20 bank robberies here in Albuquerque but even one bank robbery is too many," said Frank Fisher, a public affairs specialist with the FBI.

Fisher says the suspect in the video is one of several serial bank robbery suspects they have been looking for.

"We have found, through our experience, that the more frequently somebody robs a bank, the bolder and more reckless they tend to get with more threats – and that becomes dangerous," Fisher said.

The FBI describes the suspect as a white man with a medium build, dirty face and unkempt appearance. The man is presumed to be in his late-30s to mid-40s, around 5-foot-8 to 6-feet-tall and weighing around 160-180 pounds.

The man was wearing a gray mask, green hooded jacket, dark pants, light-colored shoes or boots and was carrying a black backpack during his first robbery, where he was asked to take off his sunglasses.

In the second robbery, he was wearing eyeglasses, a dark jacket, a dark baseball cap, a dark bandana, blue jeans and white shoes.

The FBI is offering a reward of up to $2,000 for information leading to the arrest and conviction of the suspect. Anyone who has information can contact the FBI at 505-889-1300 or submit tips online at tips.fbi.gov.

U.S. Eagle Federal Credit Union issued a statement in response to the robbery:

On Tuesday, March 15th, a robbery occurred at the US Eagle branch, located at 5201 Antequera Rd. NW. Nobody was injured during this incident, and disturbance was kept to a minimum thanks to our well-trained and observant staff. We put our complete trust and cooperation with local and federal authorities and know they will catch the perpetrator.