MORA COUNTY, N.M. – Hotshot crews are burning fuel before the Hermits Peak and Calf Canyon fires arrive in an effort to starve out the fire before it can reach Las Vegas, N.M.

KOB 4 got an up-close look at those fuel-burning efforts on the ground near Las Vegas, as crews work to get ahead.

Firefighters were making progress with controlled burns, finishing what they call a "catcher’s mitt." Leaders describe that as a way to box in their existing fire line and hold the fire in a spot away from the City of Las Vegas.

The “catcher’s mitt” is at the end of a combination dozer and hand line, from Luna Community College, down to Highway 283. But another challenge to the existing line could come soon. Leaders and meteorologists are expecting another severe weekend.

"The main head of the fire is angry. It’s trying to move toward our line and what we’re trying to do is make a line that can contain that fire a little bit and to control that anger,” said Don Muise, Southwest Incident Management Team 2 team safety officer. "It’s gonna be a long duration event but we’re gonna get this fire taken care of but the next start could go this big again and that’s just based on the conditions in the southwest we’re dealing with."

The fuel-burning effort was happening on the southern edge of the fires – but leaders told KOB 4 the same effort is happening on all sides of this fire, especially in the northern area where there are more concentrations of homes.

Thousands are evacuated right now because of these fires, and the hope is the work in the air and on the ground can get those evacuees back home.

At the evacuation shelter in Las Vegas the community is coming together to help evacuees. National Guard soldiers and volunteers were in front of Memorial Middle School, unloading donations by the truckload and helping to carry supplies to people’s cars.

“So far my house is still standing, but it’s surrounded by smoke,” said Janna Lopez, evacuation shelter organizer. “I came 12 days ago and haven’t left to feed, to hug, to listen, to comfort and even though I’m evacuated I am not gonna stop giving.” 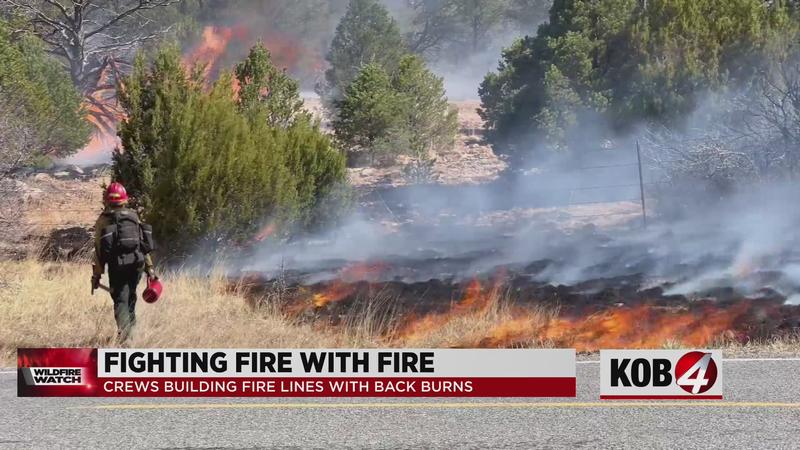