ALBUQUERQUE, N.M. – The annual Twinkle Light Parade is back in Nob Hill after the pandemic caused a cancellation last year.

One float is shedding some light on an important topic: youth suicide prevention. KOB 4 met up with volunteers early Saturday as they were decorating their school bus to spread their message of hope.

“Usually it’s just a lot of bright colors and things but I’ve never seen something as big as there is today,” said Amelia, peer helper.

“We wanted to do a huge kickoff event by joining the twinkle light parade and we were able to be a bus to decorate as you see behind me,” said Susan Hewatt, APS Resource counselor.

All of the students hanging up lights and tinsel are peer helpers – trained in youth mental health first aid. Having a float in the twinkle light parade helps bring the message outside school walls.

“I’ve struggled with mental health before, mental issues, a lot of different things so being able to have the idea that I could help somebody else and save somebodies life possibly really motivates me to be a part of this,” said Amelia.

During the first round of COVID lockdowns people struggling couldn’t always get the help they needed.

“We noticed a big increase in anxiety and depression during this time because kids just said they really felt alone, they didn’t know where to reach out or to go to for help. We tried to provide as much services and counseling support as we could in the online world but it was very difficult,” Amelia said.

For some, the holidays aren’t all holly and jolly – but this float serves as a reminder that mental health matters.

Along with decorating the bus, peer helpers also handed out shirts. The shirt was designed by a student who worked with Expora and includes a QR code – so when you scan it your brought to a website that is a compilation of mental health and suicide prevention resources. Reminding folks that someone has you’re back. 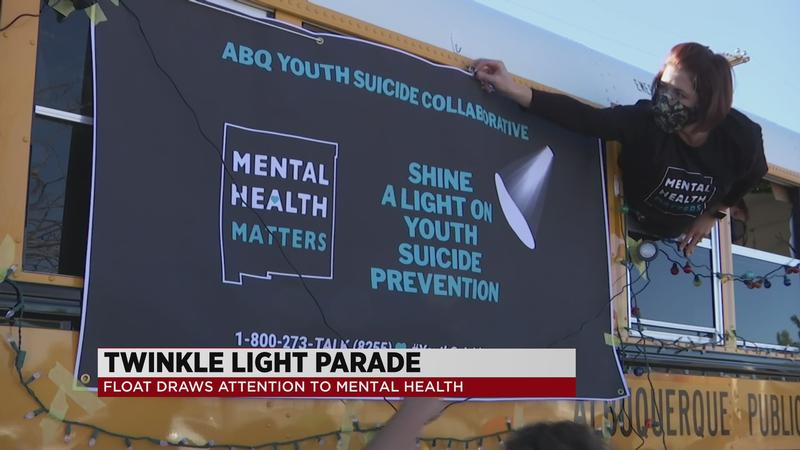