ALBUQUERQUE, N.M.- The Hobbs Police Department is facing allegations of racism and retaliation.

The suit alleges an officer used the racially-charged language while talking to another officer.

"Looks like we arrested a lot of (expletive) today," the suit alleges an officer said.

"Hearing an officer say that, it was really shocking and really disturbing to me," Ellis said. 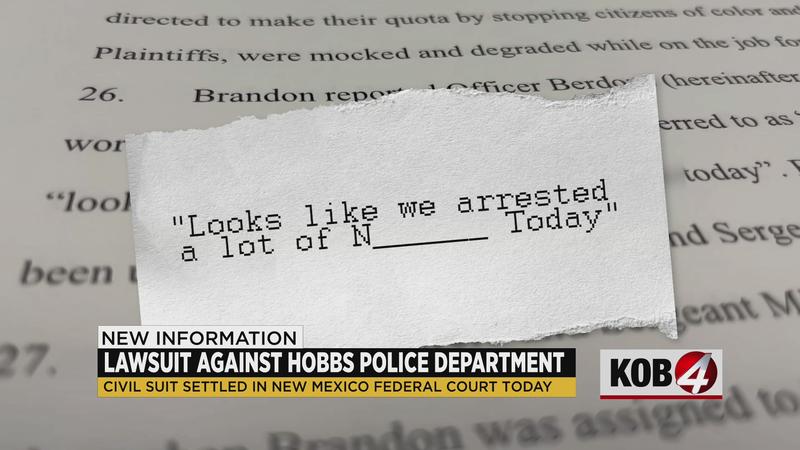 In a deposition, the Hobbs NAACP president showed how unhappy he was to hear the slur.

"It’s an unforgivable thing for an officer to use (expletive) in a briefing," Joseph Cotton said. "There’s no justification for it."

The three officers say they were told to make their traffic ticket quota by stopping Black people on the roads. They claim they were mocked and degraded for not following through with the demand.

The attorneys who filed the suit hired multiple experts to review the allegations, including a data analyst to look at the numbers. The analyst found that people in neighborhoods with higher populations of minorities were stopped more by police.

"We would go to the same neighborhoods and pick the same people up over and over, and to me, it was unjust. It was horrible," Robinson said.

There are also allegations in the lawsuit that officers coerced Black people into letting them search their vehicles without a warrant.

The three officers say the department retaliated against them after they reported the alleged discrimination, saying they were harassed, needlessly put in danger, and overall, were in a hostile work environment.

The City of Hobbs has been ordered to pay $1.4 million to the officers who came forward.

The three officers say the settlement means more people can be aware of these issues.

"We were told that numerous lawsuits have opened up since we started this," Robinson said. "People are starting to come forward."

The Hobbs city manager seemingly denies the issues raised in the lawsuit. A spokesperson issued the following statement:

The allegations in this case which was filed in 2017 were certainly concerning. However, after four years of litigation, eleven different attorneys involved, nearly three hundred documents filed, thousands of evidentiary documents exchanged, and numerous depositions taken, the decision was made by the City’s insurer to settle the matter. I certainly hope our community members take comfort in knowing that the records in this case were diligently reviewed for any sign of potential race-based policing. After a thorough review, we are confident that minority members of our community were not targeted for police enforcement. The City of Hobbs will remain an inclusive community for people of all walks of life. The City of Hobbs wishes the three Plaintiffs in this case well in their future endeavors both inside and outside of law enforcement. Finality in this matter is important for the City of Hobbs and the Hobbs Police Department. With the hiring of a new Chief of Police in 2019 and new Deputy Chief in 2020, we remain excited and optimistic that with this matter behind us, we can move forward with our continued focus of improving public safety and community relations in Hobbs, New Mexico. — Manny Gomez, City Manager