ALBUQUERQUE, N.M. – Albuquerque police say a violent offender is on the run after he cut off his court ordered GPS ankle monitor.

Albuquerque police are looking for Daniel Drake, a former Metro 15 offender, who has been in and out of jail since 2014.

Police say they were notified about the tampering less than two hours after he cut it off, but they’re running into obstacles from the courts in getting the recent GPS data.

Drake’s history in the New Mexico court system is extensive. The 28 year-old’s felony criminal history dates back to 2013, starting with robbery and aggravated assault charges.

He was let out of jail on his own personal recognizance in 2018, with the promise to not drink alcohol, do drugs, or have contact with his victim.

In 2019, he was charged with felonies on three separate occasions, including kidnapping and armed robbery.

"The Metro 15 program was released to identify drivers of crime that are key people we feel are in the community who are escalating to violence and that we need to take into custody and hopefully detain,” said APD Chief Harold Medina.

Drake was arrested as part of the initial Metro 15 operation effort, but was let go in March 2020, after about three months in jail.

Almost exactly one year later, he was charged with aggravated battery and assault against his ex-girlfriend, and criminal property damage.

A judge gave him more extensive conditions of release after that charge, just last week.

He was given a GPS ankle monitor on Dec. 20th. Police say he cut the monitor off Tuesday, Dec. 28th while he was in northeast Albuquerque– just eight days after it was put on him.

"Some changes need to be made for this program to be viable. You know at this time, I’m not gonna get into the fact that I don’t think this person should’ve been on GPS to begin with. So there’s still a lot of changes that we’re working on,” said Medina.

Medina says they’ve seen positive changes in the courts telling them about tampering in a timely manner, but there are still hoops to jump through for police.

"The frustrating part is he cuts the ankle bracelet off and we are once again having to go through the loops, producing paperwork and getting subpoenas to get the historical data of where this person was on a GPS monitor over the past few days.”

He wants the GPS data-gathering process to be easier, so officers can track down suspects faster.

"The solution is not another road block for law enforcement to try to get data. The solution is everybody coming to the table as we did in the metro crime initiative and the courts carving out a solution of how they’re gonna assist us and be better partners,” Medina said. “We really need people to have a sense of urgency in upgrading their processes and programs to fall more in line with the community needs."

Police have a warrant for Drake’s arrest, anyone with information is asked to call 242-cops or Crime Stoppers.

KOB 4 got a statement from his attorney Sarah Wintermute through the public defender’s office as well:

“Only PTS knows exactly when an ankle monitor is tampered with or cut off. When that happens, PTS initiates a warrant and several criminal justice partners are alerted, including the Public Defender if the defendant is our client. I received notification via e-mail at 2:34 p.m. about the warrant for Mr. Drake. If you look at SOPA, it shows that a warrant was issued at 6:45 a.m. today. However, the monitoring violation report was officially filed by PTS at 1:59 p.m., so we were notified very shortly afterward.

Just because someone is charged with a crime that sounds violent, that doesn’t mean they committed that crime or that there isn’t another side to the story. My client was not on probation, rather he was being monitored by pretrial services. Meaning that his case is still pending trial, and he is still presumed innocent under the law. This case was about to resolve, and while I can’t discuss private details about my client, I can ask you to consider why someone would cut off their ankle monitor? The typical narrative includes painting a defendant to look like a dangerous criminal out to evade law enforcement. But many – if not most – of our clients are in an intense fight with drug addiction, and if they can’t access treatment, the addiction can win. Many of our clients are also struggling with access to mental health resources, and most are left to find those resources on their own.

As for your question about a federal detainer, I’m not sure where that information is coming from. Mr. Drake was arrested by US Marshals in October. He was released from MDC, which indicates there was no federal detainer. And there is no federal case pending as far as we are aware.

Lastly, the press release by APD talks about my client’s prior charges of “Criminal Sexual Penetration, Felon in Possession, Aggravated Assault and narcotics.” SOPA shows that he was never convicted of those charges.” 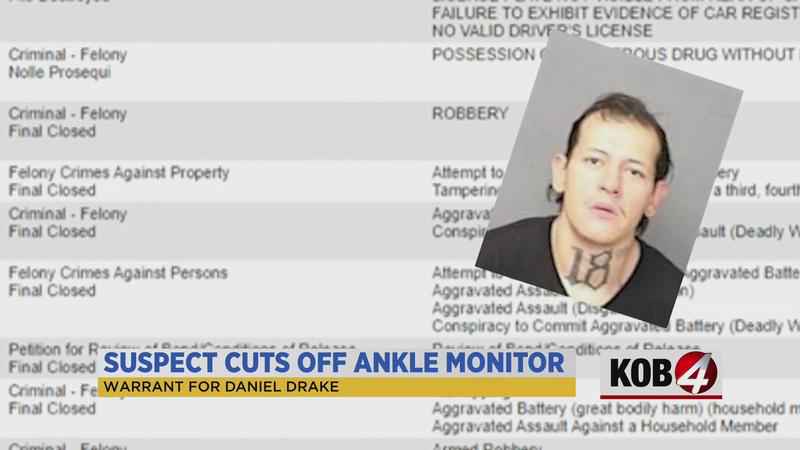