ALBUQUERQUE, N.M. — A suspect has been arrested for robbing a postal worker at gunpoint last month.

According to the criminal complaint, a mail carrier was working near the intersection of Domingo Road and Espanola Street when two men pulled him to the ground by the back of his shirt and demanded his keys as they pointed a gun at him.

After they got the keys, the suspects ran back to their car. Authorities said the Ring video images show Boyce drive away in a black Dodge Charger. 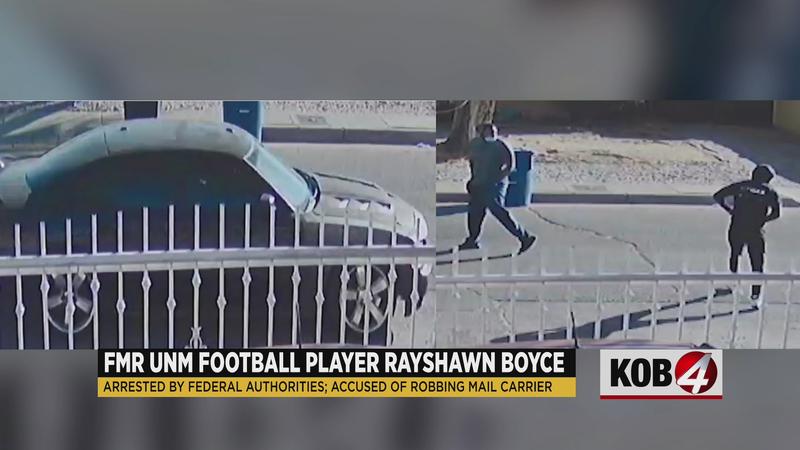 When the Postal Inspector located Boyce, they say he admitted to changing the appearance of his car because he knew it was used in a crime – but he denied actually robbing the postal worker.

The postal inspection agencies do not believe all of the post service robberies last month are connected. For this case, Boyce will be in federal court again Tuesday to see if he will be held behind bars until his trial.He faces charges of robbery of a postal employee, theft of stolen or reproduced keys, and brandishing a firearm during a violent crime.

This isn’t Boyces first time in court. Back in 2018, he plead guilty to beating his ex-girlfriend and one of his UNM football teammates. He was suspended from the football team and was sentenced to five years of probation. This investigation found he was also in violation of his probation because he tested positive for cocaine on Jan. 20, just two days after the robbery.