ALBUQUERQUE, N.M. – Five drive-by shootings in a matter of two weeks has left a southwest Albuquerque neighborhood on edge.

KOB 4 first brought this story last week before the fifth drive-by shooting over the weekend.

Neighbors say they can’t raise their kids around this kind of violence, and are leaving the neighborhood in search of a safer one, it seems like their only option.

"We’re very tired, we’re not able to sleep at night. Once we get woken up by the shootings, then we can’t go back to sleep because we’re wondering if they’re gonna come back,” said a neighbor.”

This is the current reality for some neighbors living in a southwest Albuquerque neighborhood.

"It’s been very scary, we’ve been kind of staying here and there, kind of avoiding being home because we don’t feel safe.”

This woman has three young girls, she lives right next door to a home that shooters have been targeting in five recent drive by shootings.

"Night comes by, and I start getting anxiety because I really don’t know what’s going to happen. Especially with my girls here and then waking up to mom screaming because they’re all so scared. And I can only do so much."

Her home has three bullet holes, and her neighbor’s home has dozens.

"I’m grateful nothing has happened, but it’s just getting very dangerous and it’s just so frequent."

The family living in the targeted home says they’re planning to move—and their neighbors might follow suit.

"I haven’t slept in the two weeks that this has been going on. I’ve been staying up trying to watch the cameras."

Their cameras caught what they say looks like the same car on two different nights.

"One of us is bound to lose a life sooner or later, you know with this happening continuously."

KOB 4 reached out to Albuquerque Police Department for an update on the investigation of these shootings, a representative said:

"Our detectives are devoting more resources to investigate the shootings in this neighborhood. We are hopeful we will get more information to help stop whatever is driving these shootings and putting people at risk."

"To move, it’s heartbreaking. It really is."

"This neighborhood was very peaceful, we were very comfortable being here all this time until this last month, or couple of weeks it’s been."

And are holding out hope that this violence will stop.

"We miss being home, we love our house and so we’re just hoping something gets done."

Neighbors say they plan to hand over all the security camera footage they’ve collected over the past two weeks, if and when investigators ask for it. 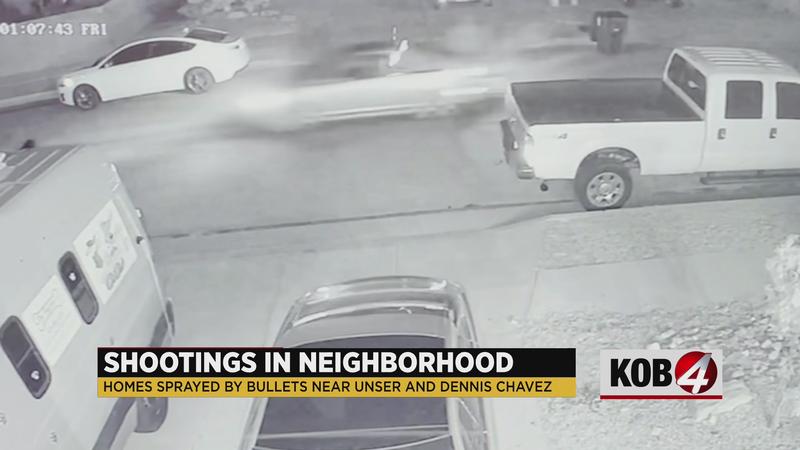