ALBUQUERQUE, N.M.- A friend is coming to the defense of a man who caused a scene at a Manny Gonzales political event in Albuquerque.

Kaelan Dreyer was charged with battery and resisting arrest.

The sheriff, who is running for Albuquerque mayor, claimed Dreyer was part of a "coordinated" effort by protesters to cause chaos.

However, Dreyer’s friends said there was no intention to cause chaos.

"What had happened is one of his friends asked him to go to the Sheriff Manny rally," Quinn Smith said. "Unbeknownst to Kaelan at the time, this friend had a drone." 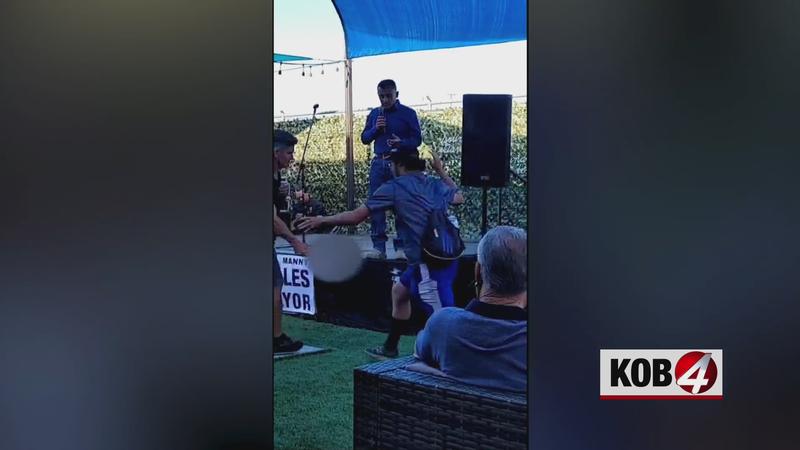 "The drone was getting too close to the stage, so someone pulled down the drone and Kaelan ran in and grabbed the drone," Smith added.

Smith said the situation was made worse because Dreyer suffers from autism.

"What happened is one of the people there, we don’t know if it was security or what, grabbed Kaelan, and it was an uncontrollable, and of course, to someone who has autism, that’s terrifying," Quinn said. "They can’t really control what happens after. He just threw a blow, whatever he wasn’t thinking, he didn’t know where it would land, and it barely grazed Sheriff Manny’s hands."

A criminal complaint states that Dreyer told police he didn’t mean to hit the sheriff.

Gonzales told KOB 4 that he wasn’t concerned with the swat, but charges are still being filed.

Now, they are stepping in to help Dreyer fight the charges.

"Unfortunately, Kaelan’s family isn’t in a position to afford the legal costs of defending such a serious and unfounded charge, and so we decided to set up this GoFundMe to help him, and really it’s to raise legal fees," Quinn said.

Ultimately, they hope the sheriff will consider dropping the charges.

"Kaelan went there just to see what was happening. He didn’t go there even to protest. His friend had the drone, and it wasn’t an adult toy that was attached to it, it was a sock that stuffed with paper with googly eyes on it, and I think we just need to put this into perspective and consider Kaelan’s unique and exceptional situation," Quinn said.

KOB 4 reached out to Gonzales’ campaign Saturday, but never heard back.