ALBUQUERQUE, N.M. – There is a long road to recovery for an East Mountains woman. Destiny Sanchez was shot in the face almost two weeks ago.

She’s alive, but her boyfriend is not. Vincente Montano was found in a shallow grave near a friend’s home.

Daniel Lee Kota is in jail facing charges for that murder. But what exactly happened, that led up to all of this, is still under investigation.

There’s still a lot to uncover, and Sanchez’s friends are hoping the community rallies around the mother of two.

Friends said she is extremely lucky to be alive. But there is a long journey ahead. Sanchez has worked at the Mr. Gas Mart, Phillips 66, in Edgewood. This weekend they’re hoping to show her family some support.

According to court documents, everything started at a home on a secluded road in the East Mountains. Court records show Destiny Sanchez and Vicente Montano were at the home of Daniel Lee Kota.

According to documents, Kota admitted to killing Vicente Montano, Sanchez’s boyfriend. Kota told police he did so after he told police Montano shot Sanchez with a black pistol.

Kota then told police he buried him in his yard.

"It didn’t hit me until a few days after it happened, you know, walking into my office and her not being there, would never be the same here for me," said Margaret Doerr, coworker. "I just want to give her some money to help her when she recovers."

From the minute she got the news, she’s been trying to help her recovery. She said the mother of two now needs all the help she can get.

"She still has a bullet lodged in her spine which is an inch away from her spine that they still have to remove, so it’s going to be longer she just wants to come home so bad," said Doerr.

KOB 4 heard from Sanchez, Facetiming from her hospital bed.

Doerr said this weekend they are hoping to raise some money with a second annual customer appreciation event she started with Sanchez. There will be freebies, games and more. It will be at the Phillips 66, Mr. Gas Mart in Edgewood, Nov. 6-7 from 12 p.m. to 6 p.m.

Doerr also set up a GoFundMe page for Sanchez and for her two kids, who are going through so much.

This, while detectives try to get to the bottom of what really happened out there.

“Who knows what happened. There’s different stories and I just feel God’s hand was in a lot of this,” said Doerr. “I just hope he can make peace with himself with what happened. When the truth comes out, we’ll all know. I feel devastated for any family member that has to go through this.”

Kota is behind bars. He is facing a murder charge. It’s important to note, documents said there were three kids inside that house at the time all of this happened. 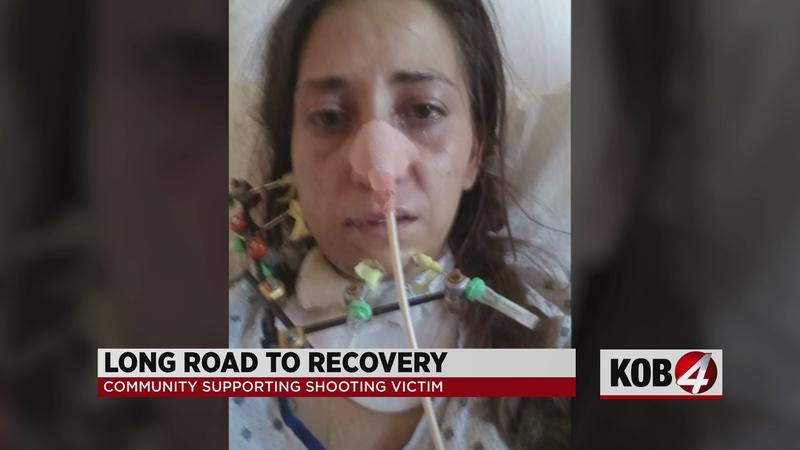