ALBUQUERQUE, N.M. — The Tafoya family is dealing with a loss they thought was impossible. Lawrence Tafoya, the anchor of the family of six kids, eight grandkids, and thirteen great-grandchildren, died from COVID-19 earlier this month.

"We didn’t believe that this could happen,” said Daniel Tafoya, one of Lawrence’s sons. “And so when it did, it didn’t make sense."

Lawrence was 74 years old. His kids say he was healthy, didn’t have any underlying conditions, and was still running his general contracting business. They say he was even still roofing.

"I’ve never seen somebody his age doing what he was doing,” said Tafoya.

Tafoya says his day started having flu-like symptoms in early September. Since he was fully vaccinated against COVID, they thought it was just the flu. But things changed within a week. 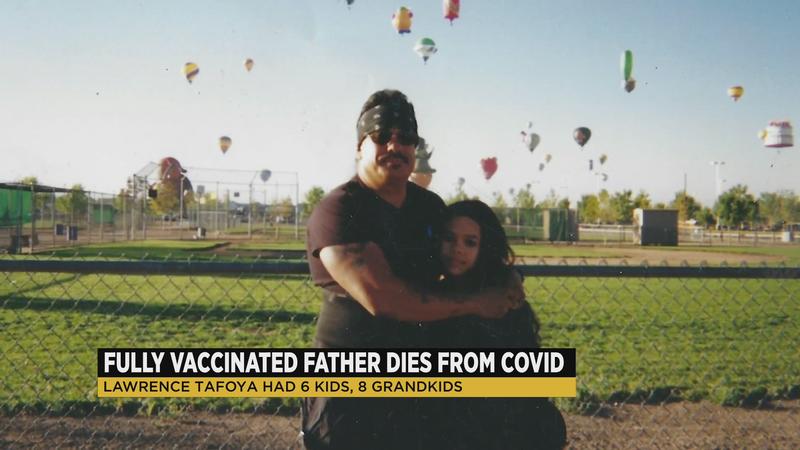 "He ultimately went in because he just couldn’t breathe,” said Tafoya.

Tafoya says they didn’t say their goodbyes, because they were confident their dad would beat it.

"We were so confident that he had the vaccine, and he’s healthy, no underlying conditions, he’s in the hospital so what more could you do for him?" said Tafoya.

Within two weeks in the hospital, Lawrence Tafoya was on a ventilator.

"We didn’t have an opportunity to say goodbye or say anything,” said Tafoya.

Health experts say cases like his are very rare. Dr. Mark Epstein, CEO of True Health New Mexico, says about 95% of New Mexicans who have been dying from COVID-19 are unvaccinated.

"The virus is relentless,” said Dr. Epstein. “It will continue to take advantage of opportunities wherever it can."

"It’s a feeling that I wouldn’t wish on anybody,” said Daniel Tafoya.

The family started a GoFundMe page to help with funeral and health care costs. You can donate here.