GALLUP, N.M. – It’s been more than two weeks since seniors pulled a prank at a New Mexico high school, getting them into serious trouble.

Children have been suspended, a coach has been fired and criminal charges are still a question mark. But a new form from the district will apparently make it all go away and in time for graduation, all students need to do is waive their right to a disciplinary hearing.

KOB 4 talked to parents about their hesitancy to sign.

"We didn’t feel right about it. I felt like we’re being given an ultimatum," said Gervana Begaye, Gallup High School parent.

Gallup McKinley County Schools presented a new option to suspended seniors if they want to graduate next month. This all follows the senior prank on April 1 that left behind a mess of streamers, books, pinatas and toilet paper. The school district alleges it was worth $30,000 of damage, but a police report says there was $0 in damage.

The conditions were that students would remain suspended through the rest of the school year, barred from prom and sports. But they would be able to walk with their graduating class in May.

"The waiver they presented to me was not something I was familiar with," said Spencer.

Spencer is a senior parent and a school district employee and she says she’s processed hundreds of hearing documents herself, but none like this.

"It didn’t sit well with me and my gut and just the way I was feeling," Spencer said. "I did ask if their attorneys or the board member approved this, this document being given out to the parents. And he said, ‘yes.’ And so I told him if he can get it and acknowledge and have a revision to the document and the date, then I will go ahead and consider signing it." 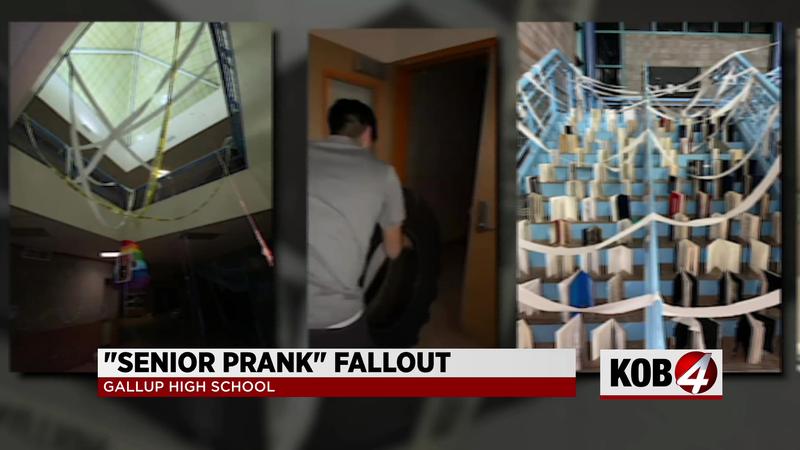 Later, Spencer got a call back from the hearing authority officer, saying board members were not willing to do that. So he offered to go back to the original notice of a hearing or waiver, traditionally used across the district.

"I don’t know why this wasn’t done the first time. We did seek out two additional counsel, and we were told not to sign anything," said Spencer.

In the meantime, two of Spencer’s children remain suspended indefinitely, unable to participate in next month’s graduation ceremony.

"I have no idea where we’re at as far as what is taking place. Right now," Spencer said.

Meanwhile, Begaye says her son has yet to receive any hearing form.

KOB 4 also spoke with one man, who was the softball coach at Gallup High, that is, until he lost his job last week because of this mess.

"She handed me my termination paper, stating that I was no longer working or coaching with Gallup High," said Rayfert Spencer, parent and former GHS softball coach.

Rayfert says he was fired from Gallup High School for mishandling his keys. In his termination paperwork, the principal stated that Rayfert indicated he was unaware that a student used his keys to enter the building on the early morning of April 1. The paperwork goes on to say Rayfert violated school policy by not properly storing his keys in a safe location that students cannot access.

"I had to leave the keys to have my assistant coaches get our equipment ready," said Rayfert.

Since Rayfert did not work for GHS full-time, he says sometimes he had to hide his keys outside of the school for his four assistant coaches to use. They reportedly only have one set of keys between them, and have requested copies from school officials in the past.

"They said, they couldn’t give me any more extra keys. So I had to place my key where we usually place it for my coaches to pick it up," Rayfert said.

That was the case the day before the prank. Now, Rayfert says he is unsure how officials concluded it was his key that was used to gain access to the school, the next morning.

"I have not seen any kind of evidence stating my keys was used. They just said it was, used no video or nothing," said Rayfert.

KOB 4 reached out to the school district multiple times to follow up on the investigation and we still have not heard back.