ALBUQUERQUE, N.M. — An Albuquerque gas station worker was robbed at gunpoint over the weekend in the middle of the day.

Dwila Allen said she is feeling better now – but on Saturday, she was scared for her life. Allen works for the Fill Up station on the corner of 4th and Menaul.

Around 11 a.m. Saturday, a man wearing a black hoodie, a hat and sunglasses walked into the gas station. He told Allen he had a flat tire on her car, prompting her to come over and check.

“As soon as I did, he dropped a sawed-off shotgun from his sleeve,” Allen explained.

From there, the suspect pushed Allen behind the counter and told her to put everything in his bag. 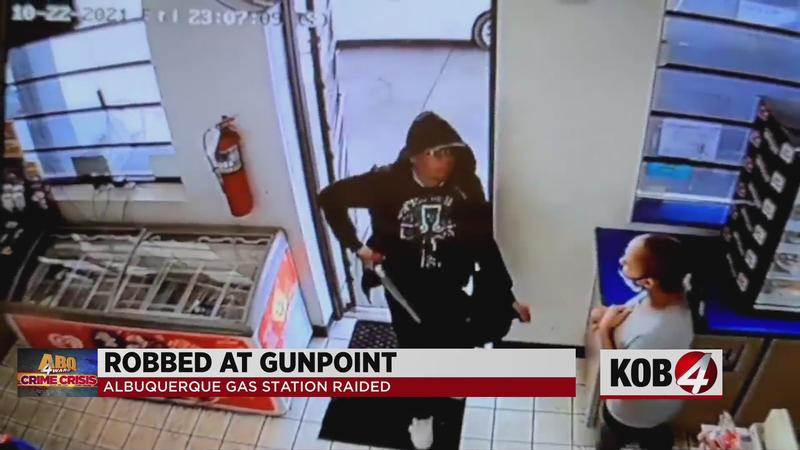 “He started grabbing cigarettes and made me open the register, then pulled me into the back office,” Allen said.

The owner of the store, Fayiz Hassan, said the suspect got away with thousands of dollars in cash and cigarettes – a situation they have never had to deal with before.

“It’s been a nice place to work actually,” Allen said, “I love my job but it’s just been out of control lately, everything has been out of control. They come in, they grab stuff, they run out, but on Saturday he came in with a gun.”

The Fill Up station has multiple cameras inside and outside. After reviewing the footage and working with APD, they have an idea who this man is.

“I think we recognize the person he is one of the homeless people we have seen and is a regular customer at both of my stores,” Hassan said. “we are just doing this in hope that people recognize him and they catch him before he hurts somebody else.”

While Hassan is frustrated with the situation, he is glad no one got hurt and he always tells his employees.

The investigation is ongoing. If you know or recognize the man on the camera, you’re encouraged to call police.