ALBUQUERQUE, N.M.— In this series of interviews, KOB 4 asked each candidate running in the 1st Congressional Special Election to allow us to join them in an activity they enjoy while we asked questions that would allow voters to know both their personalities and policy ideas.

Dunn and his wife restored the ranch, which KOB 4 traced back to the 1920s.

Aubrey Dunn: When we first married, I sold real estate in Albuquerque, then we moved to Colorado for a couple years. Then Roswell– I worked for a bank there and in Alamogordo.

Dunn spent 25 years as the CEO and president of a bank. 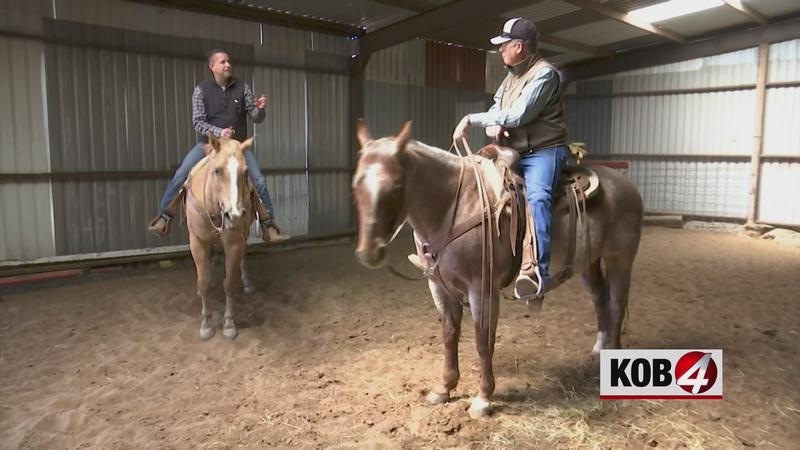 In 2014, he was elected as New Mexico’s land commissioner.

Despite having numerous jobs, Dunn said ranching is where his heart is.

Chris Ramirez: Why is this place so important for you? Why did you ask us to meet you here?

Aubrey Dunn: Well, this is my primary occupation right now– number one and our life kinda centers around this ranch right now. And it gives a good view of the type of people we are and our value system and what’s important to us.

Chris Ramirez: If you describe that value system, what does that look like for you?

Aubrey Dunn: Well, I think it’s important for everybody to have a job and employment and I certainly have that here. My wife and I are both workaholics and this really fits the bill, there is always a lot to do on a ranch.

Chris Ramirez: When we think about the issues important to the 1st congressional district, what do you think is the top issue?

Chris Ramirez: As you know, most of the population in CD-1 lives within the Albuquerque metro area. You being out here on the ranch, do you think you are still able to be in touch and in tune with the metro issues that are happening?

Aubrey Dunn: I think we see it in a different way, so we see the problems from outside in. I think I have a unique view. When you look at some of the other candidates, they may live there now, but they haven’t lived in New Mexico as long as I have. I think I have an advantage being on the ranch in some ways.

In 2014, Dunn won the land commissioner seat as a Republican. In 2018, he ran for the U.S. Senate as a Libertarian. In the CD-1 special election, he is running as an Independent.

Chris Ramirez: Why not run with a major party, and why run as an independent?

Aubrey Dunn: I know it sounds like I go back and forth, but when I look at the party system after being involved as a state official, I feel like we get more concerned about the party politics than the actual legislation and helping the people of New Mexico. The reason I am running as an independent is because I think we need a different choice and the two parties are failing us, in my opinion. We are getting too partisan as a country.

Dunn believes more independents in Congress could help break the gridlock. In Dunn’s opinion, infrastructure and high-speed internet in rural areas should be prioritized.

Chris Ramirez: What do you think voters ought to know about you?