ALBUQUERQUE, N.M.- In this series of interviews, KOB 4 asked each candidate running in the 1st Congressional Special Election to allow us to join them in an activity they enjoy while we asked questions that would allow voters to know both their personalities and policy ideas.

Chris Manning asked us to meet him at small gym in Farmington. After a workout with weights and some cardiovascular activity, we sat down on some blocks for Q/A.

Chris Ramirez: Why is this such an important part of your life?

Chris Manning: This is my stress reliever. I work a lot. I have school, now the campaign. I started coming to the gym when I was 16 and started lifting. I was a scrawny kid and this was a way to change the perception of myself and I have just never stopped. 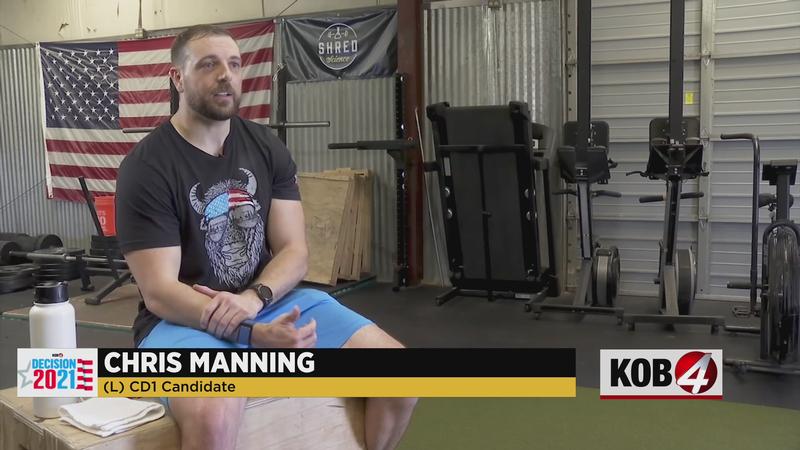 Manning was born in Albuquerque, but around the age of nine, his family moved to the 4-Corners. He went to college in Phoenix and joined the Arizona National Guard. Soon after, he was deployed to Afghanistan.

Chris Manning: I loved my time in the service. Obviously it’s about the guys who you serve with and I made lifelong friends. But now, I look back at it and I have some not-great-memories because like many other veterans I was exposed to the burn pits and I have COPD.

Manning says part of the reason fitness is so important to him today is because he knows his COPD could present major problems if he doesn’t take care of his health.

Chris Ramirez: You have military service under your belt and now you are looking to serve through leadership and being a part of policymaking. Why is that?

Chris Manning: If there is something going wrong, I don’t believe in complaining about it, I believe in taking action to try to change it. Around 2016, I had been an Independent. I didn’t really care for political parties, but I really wanted to get more involved. I aligned with the Libertarian Party philosophically. I want to see something different for us and the only I can do that is by actively trying to change that.

Chris Ramirez: What do you think is the most important federal issue facing CD-1?

Chris Manning: I believe for everyone, it doesn’t matter what part of the district you are in; for me, it’s health insurance. Ten to fifteen percent of the population not having health insurance is a big thing. We have the largest percentage of people on Medicaid in any state, we have one of the least healthy populations, and we have a quarter million people with diabetes.

As a Farmington resident, Manning lives outside of the boundaries of New Mexico’s 1st Congressional District. It’s perfectly legal. The U.S. Constitution permits members to not live in their districts.

Chris Ramirez: For voters, that will be a question that comes up when they are thinking about you. How do you address that?

Chris Manning: Well the voters of CD-1 have to decide what’s more important, my address? or my solutions to the policy? I hope that when they take a look at what I’m offering, at the end, what matters most are my ideas and who I am as a person more than the place I live.