ALBUQUERQUE, N.M.— In this series of interviews, KOB 4 asked each candidate running in the 1st Congressional Special Election to allow us to join them in an activity they enjoy while we asked questions that would allow voters to know both their personalities and policy ideas.

Melanie Stansbury met up with Chris Ramirez along the Rio Grande where she was working with a team of water scientists from UNM to figure out how fast the river was flowing. Afterwards, Stansbury answered some questions about her bid for Congress.

Chris Ramirez: Let’s talk about why you wanted us to meet you here— literally in the water.

Melanie Stansbury: Well there are a couple reasons. First of all, I grew up here. I grew up playing in this river living in the North Valley, so this is my old stomping grounds. But this is also my current stomping grounds because I am a water resources professional—I work in the sciences. I thought it would be really important to come down here and talk about the river, talk about the drought.

Melanie Stansbury: For me, this is my spot. This is where I unwind, reconnect and relax at the end of the day.

KOB 4’s asked Stansbury about how her journey led her to run for Congress.

Melanie Stansbury: I grew up in low income family here in Albuquerque, and like so many families in our area, we really struggled. Growing up I always asked, why do so many people in our community struggle when we live in this beautiful place so rich in culture and resources?

Melanie Stansbury: I got elected and since then I’ve been focusing on the issues that affect our community like food and hunger, homelessness, sustainability, water, climate, things like that.

Chris Ramirez: What do you think is the most important issue that this congressional district faces? 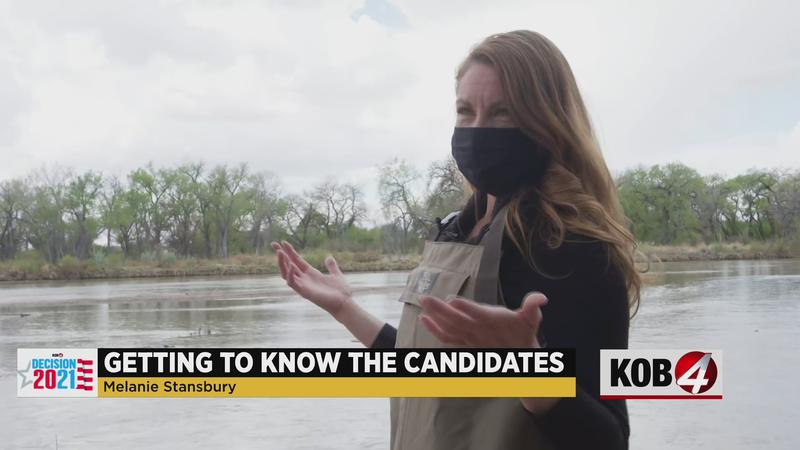 Melanie Stansbury: I think there are two issues that are the most significant issues. First and foremost, it’s economic recovery coming off the pandemic, but also because New Mexico’s economy always struggles. The second biggest issue is the drought we are facing because it affects everything across our communities.

Chris Ramirez: When we speak to voters, especially here in Albuquerque, we hear public safety issue is an issue. What do you think Congress could do to address Albuquerque’s public safety crisis?

Chris Ramirez: Americans generally have low confidence in Congress because they see so much dysfunction. How do you make sure that as a member of Congress, you aren’t contributing to that dysfunction, and that you break through that gridlock that we see too often?

Melanie Stansbury: Well, I think that’s why it’s important that regular people run for office. I think the reason people have a lack of confidence in politicians is that they don’t necessarily see people who reflect their values actually serving our communities and focusing on the issues that really matter. I think one of the most important things we can do is actually focus on our communities and put their voices at the center of all our conversations.