ALBUQUERQUE, N.M. – A literal bug-eyed Goliath is bringing the post-Halloween spooks to its second home at the ABQ BioPark’s BUGarium.

Goliath beetles grow to be around the size of a grown man’s fist. They primarily live in Central African rainforests where the temperatures and humidity create a comfortable home for them.

Jason Schaller, the BioPark’s curator of entomology, has worked with his team to raise Goliath beetles and create the perfect conditions for them to survive in.

"We’re getting really close – there’s a reason why in 30 years no one has been able to perfect it, it’s pretty difficult," Schaller said. "We’re just now figuring out the last pieces of the puzzle and we’ve gotten to the point where have it regularly on display."

The beetles go through three different stages after hatching, from being larvae to pupae and lastly to being an adult. 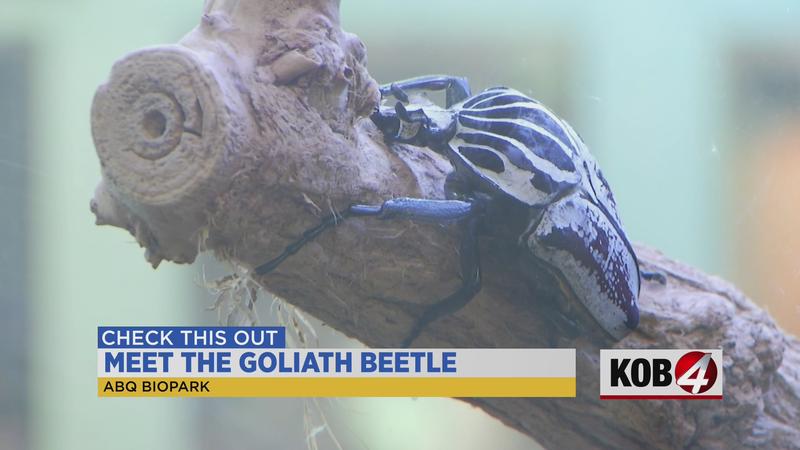 "The larvae stage usually lasts about six months, the pupae stage is usually another 5-6 months."

As they grow into being adults, they live underground.

"It’s like a big dirt egg they make to transform inside of and the fresh adult will stay inside that for 2-3 months waiting for the right conditions to dig to the surface."

In the wild, the beetles live for a few more months. However, at the BUGarium, with a steady source of food and no predators, they can live up to 10 months in a different type of life than their counterparts.

"What’s really cool about them is they’re unlike other large beetles," Schaller said. "They’re day-flying and they’re boldly patterned."

Goliath beetles are also not predatory and do not eat other larvae. Instead, they enjoy eating rotting wood.

Next time you visit the BioPark, be sure to give these guys a Goliathan amount of love for all the hard work it took for them to get here.