“I give this session honestly an ‘A’ and honestly it’s hard. It’s hard for the public. It’s hard for legislators, but I do think they’re prioritizing the right work,” she said.

One of the main priorities is COVID-19 economic relief.

House Bill 11 became the first bill to pass both chambers Friday. It will provide $200 million dollars in grants from the Local Economic Development Act Fund for small businesses. 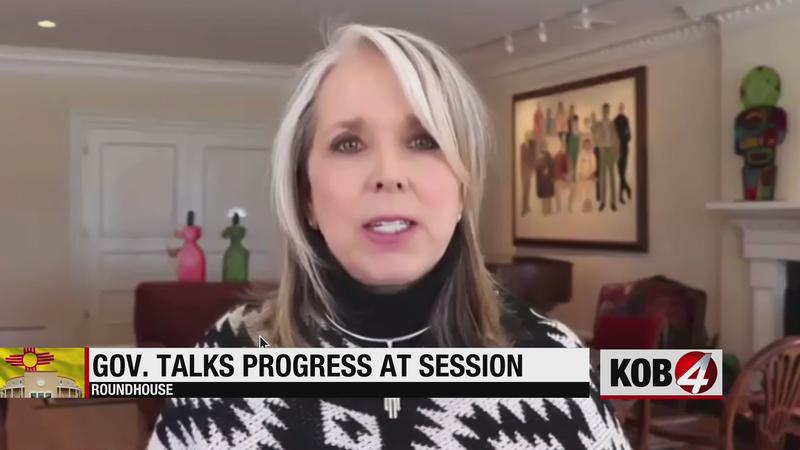 “I think it’s critical we need to be able to hold up, shore up businesses moving forward. We want them to have security to hold their current employees and to potentially hire more,” said Lujan Grisham.

Other high profile bills are still moving through the committee process, including multiple bills in the House and Senate that would legalize recreational marijuana, something the governor supports.

But it’s still a work in progress.

“I’m optimistic. Again there’s a lot of stuff going on, and I’ve seen cannabis fail because it’s complicated. But I’m seeing the right movement in both the House and the Senate in these debates, and I’m confident they’re going to meet our expectations about safety, etc., plant count, and get me something upstairs that I can sign. I’m feeling pretty good about it,” she said.

Bills that would give state lawmakers approval over the governor’s public health orders are also moving through the committee process.

The governor said she’ll veto them if they make it to her desk.

“I have no ill will and I’m not mad,” she said. “I am hearing those debates and I take them seriously. But I know how important it is in an emergency to deal with those emergencies including other opportunities and I feel confident and I feel very strongly about the effectiveness, not perfect, of the decisions that we’ve made. I think far more legislators believe that than don’t.”