Gov. Lujan Grisham goes one-on-one to discuss the pandemic, the economy and politics

Tommy Lopez: In terms of reopening, what can people in New Mexico expect July 1, and are you thinking about the potential for some restrictions to come back later? 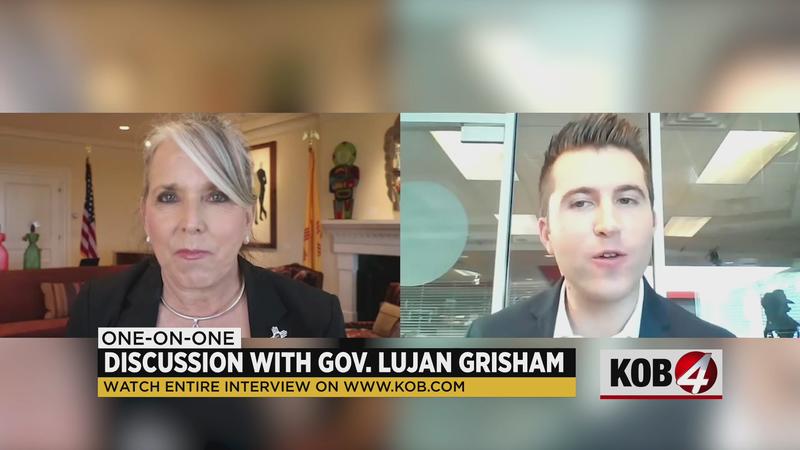 Gov. Lujan Grisham: Oh, I am not thinking about that. What I’m thinking about is vaccines, vaccines, vaccines. I really want to promote good COVID safe practices, including social distancing — smart. We’ll keep doing that in the schools — smart. We’re going to keep getting vaccinated, (giving) kiddos the opportunity not to wear masks when they’re competing and move towards that environment in a classroom, when you get a baseline of immunity.

Tommy Lopez: What do you say to people who are concerned that we are opening far later and felt like it would have been worth it to reopen a month or two or more early?

Gov. Lujan Grisham: You know, I think it’s largely, Tommy, some of the same voices, and I’m not saying that these differences of opinion, you know — they should be part of the conversation — but they weren’t based in public health. We did it based on the science. Colorado had a much lower vaccination rate. They decided to open up, and then, you know, for a long period of time, they had the single — right? — breaking records for new cases of COVID.

Tommy Lopez: We have slowed down a bit in some of the areas of progress, including in people getting their second and final shots. Are you disappointed at all with the last couple of months, and what do you think things are going to be like in terms of vaccinations when the dust settles?

Gov. Lujan Grisham: Yeah, you know, I think disappointment is the wrong word. I get frustrated, right. And certainly, all these incentives, and all these efforts are intended to make sure that we don’t take any of that for granted. I think it shows again, that this is a country that needs to have a refocus on public health in general.

We’re really going to have to double down on our efforts to provide sound, productive, non-confrontational public health education, particularly if you look at the national data, including ours — young people, you know, you feel invincible. I’m in my 20s. I don’t need a vaccine, and you do. You need a vaccine. So I’m frustrated, but I’m not going to give up.

We’re going to get to 75% vaccinated, I hope by August.

And maybe we can get well over 80% even for first shots.

Gov. Lujan Grisham: Well, a couple of reasons, and I’m glad that you missed me Tommy, so I will work hard to be more engaged. But we were pivoting. As long as we were marching forward in the way that I expected the state to do following the science, what you need for baseline immunity and keep moving forward. You know, we’ve been shifting to our economic successes, and we’ve launched new policies for child’s wellbeing and education. And so maybe what we need to do, based on your point, and I appreciate it, is I got used to having really robust discussions that are useful for us to, as policymakers, understanding the questions that people have, where it makes sense, where it doesn’t quite make sense. Maybe we need to do something more routinely about all the work we’re doing in state government. So I’m going to take that as a constructive suggestion, and I will make it happen.

Tommy Lopez: There is so much divisiveness right now, and that was on display, in one example, at your campaign announcement. It got ugly in some ways. So now that we’re reopening, how can you help us come together and to heal?

Gov. Lujan Grisham: Well, I hope I do some of that every single day by reaching out to — I represent every New Mexican, even the New Mexicans who disagree with me — but I’m going to actually pitch to you too. I think all of us — private sector, the media, government officials elected, we have to find a way for this tribal political environment that is sweeping around the globe — it’s not just the United States, but it’s found its way into a state that I would say is one of the most diverse but friendliest states and open-minded states — and, you know, what happened for our reelection announcement was painful in a couple of ways. One, it showed me up close and personal, not just in a Facebook feed, or a media presentation, the anger and vitriol, and that it was aimed at everyone, wasn’t even aimed just directly at me. It was everyone. I mean, he attacked members of the press.

That’s just not the way in which we share a difference of opinion.

Tommy Lopez: You did make the comments about ‘QAnon lizard people.’ Do you regret that in any way? How do you feel now about having said that, because now a lot of the people who share the views of those who were there, say, ‘Hey, I mean, you’re adding fuel to this divisiveness, this fire that we have in our state.’

Gov. Lujan Grisham: I don’t because I didn’t say it in a mean way. We know that that’s happened in campaigns. The tension in that moment when I came on stage was really ugly. And I wanted to make a light-hearted moment about a conspiracy theorist. I didn’t call a person a name. I didn’t call the protesters a name. I said, you know, this might have been the same time as a meeting of QAnon conspiracists.

Nobody got arrested. We didn’t create more conflict, and I ended it, which is the responsible thing to do.

Tommy Lopez: It’s not a New Mexico problem, but the workforce shortage, the worker shortage, is affecting everybody. Is there anything else the state can do to help these businesses?

Gov. Lujan Grisham: Yeah, I believe that there must be, but I also want to point out that — this hasn’t gotten nearly enough attention — and that is that the vast majority of workers who were negatively impacted during the pandemic were women.

I’m making an announcement soon that shows that we are leaning in, in ways that most states haven’t, and I think many states will find a way to follow us that makes childcare more available.

So we have to rethink how we deal with workforces. And I want the Economic Development Department and Workforce Solutions and others. They are presenting to me a variety of options, including incentives to get people, even just two months early, back into the workforce. But childcare was a major impediment in the U.S. And it is something we need to talk more about women in the workforce.

Watch the full interview in the video below