SANTA FE, N.M. – Gov. Michelle Lujan Grisham added a third item for lawmakers to take up during this special session. And she really had no choice, lawmakers passed a law earlier this year that could inadvertently shut down doctors’ offices across the state if it’s not fixed.

In March, state lawmakers increased the dollar amount that can be awarded to people who file a medical malpractice lawsuit after a person is injured or killed during a medical procedure. But a mistake in the new law could force some doctors across New Mexico to close their doors forever, less than a year later

It’s not too late to avert the crisis, but it’s close.

As so often happens when things end up in court, the mistake hinges on a technicality that could make some doctors liable for up to $4 million instead of $750,000.

The $4 million cap is supposed to apply to places like hospitals not so-called "independent providers" like doctors at Jayant Kumar’s Renal Medical Associates, which conducts surgeries, transplants and dialysis at some hospital facilities but isn’t a hospital.

"We’ll have to just quit going to the hospitals. We won’t be able to provide dialysis care in the hospital as we do right now,” said Dr. Jayant Kumar.

The difference between $750,000 and $4 million has insurance companies saying they’re out.

“Without appropriate insurance, physicians cannot and should not practice medicine on January 1st. It’s not safe for patients and it’s not fair to the providers,” said Vigil.

Specifically, the new law states that the $4 million cap should apply to hospitals or "agents" of the hospital.

But providers like x-ray doctors, OB-GYN doctors, anesthesiologists, kidney doctors and many other specialists are not

Hospital employees only have agreements with hospitals to perform services and that’s where the legal opening is.

"The main worry for us is, if we provide care at these hospitals, will we be construed as ‘hospital agents’ and that malpractice cap of $4 million will apply on us or not?" said Kumar.

Republicans opposed the initial change to the cap and argued Friday that a single-vote margin for the bill’s passage in the last regular session means it should be repealed entirely and revisited later.

"It is pretty dire,” Kumar said.

But the fix is already progressing. 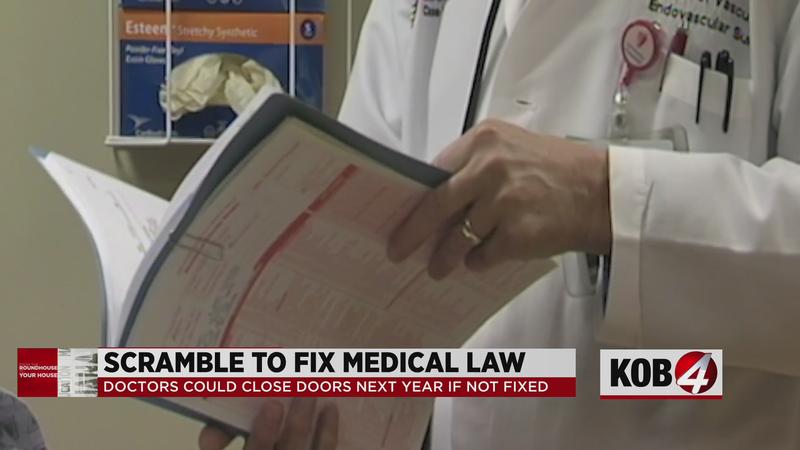