SANTA FE, N.M. – Gov. Michelle Lujan Grisham was already calling for a crime-focused session months before it began. In August, she told KOB 4 she was confident her crime proposals would pass.

"If I set that tone that this is what I expect I get it, I’ve got the votes, and I’ve got bipartisan support," Lujan Grisham said.

But what the governor got fell short of many of her proposals. During a news conference Thursday, KOB 4 asked Lujan Grisham if House Bill 68 – the crime bill package she signed into law Wednesday – actually does enough to decrease violent crime. She called it an effective effort out of a 30-day session to deal with public safety.

"Until public safety issues are completely addressed statewide and until every single New Mexican feels safe in their home and community, we aren’t doing enough," Lujan Grisham said.

A number of the tough-on-crime initiatives the governor wanted lawmakers to pass were either watered down or killed, like pretrial detention and bail reform.

KOB 4 asked the governor – why not call a special session, as she did for recreational marijuana, to get the crime initiatives that failed over the finish line?

"The difference between the cannabis special session, and we’ve got legislators here, and a crime special session is we ran out of time on cannabis and we had a large agreement about where we are and what we needed. Here to your point we don’t have agreement on what we need to do about pretrial detention and bail reform," said Lujan Grisham.

"I will tell you that House Bill 68 is an important set of tools and funding vehicles to put more officers on the streets, to create better training and recruitment, to make sure that we have stiffer penalties for the harshest of crimes that are being committed in the state," Lujan Grisham said.

HB 68 also makes it easier for law enforcement to see GPS data of suspects out on pretrial release. 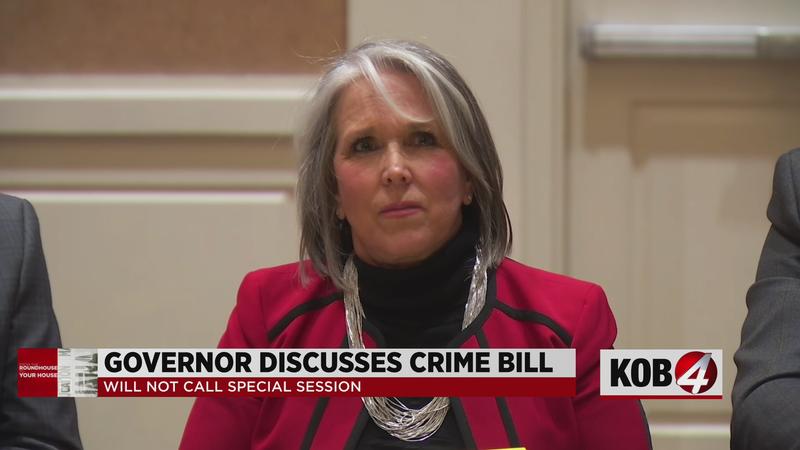