ALBUQUERQUE, N.M. — New Mexico Gov. Michelle Lujan Grisham has been trying to generate some momentum for her policies, but she says it’s been an uphill battle. She spoke with KOB 4 Investigator Matt Grubs about her crime package, what she thinks is still salvageable, and who voters should hold responsible.

Grubs: Looking at it now, does it feel like this session got away from you?

Lujan Grisham: I don’t think it got away from me. But I think it’s clear that we don’t have the right attention in public safety.

The governor is on the road, touting her higher education plan in Hobbs. She thinks that when it comes to public safety, lawmakers will agree with pay raises for state police and, as she discussed with KOB 4 last summer, some form of fund for more officers for departments across the state – although she and lawmakers are far apart on how much money should be in that fund.

It will also take time to train the new officers.

Lujan Grisham: And I think that we’ll get our increased penalties for second-degree murder and for violent crimes, brandishing a weapon or firearm. I think those do get upstairs.

Grubs: Is that enough?

Lujan Grisham: Listen, until everyone feels like they’re safe in their homes and their community, no. It’s not enough. And it’s why we’ve continued to talk about the pretrial presumption.

A bill creating a presumption of dangerousness before guilt, House Bill 5, is not likely to arrive on her desk. Too many lawmakers have questions about whether it would be effective at stopping crime and whether it places guilt before innocence for people the governor calls "violent offenders."

Grubs: In your mind, are violent offenders people who’ve been arrested or convicted? 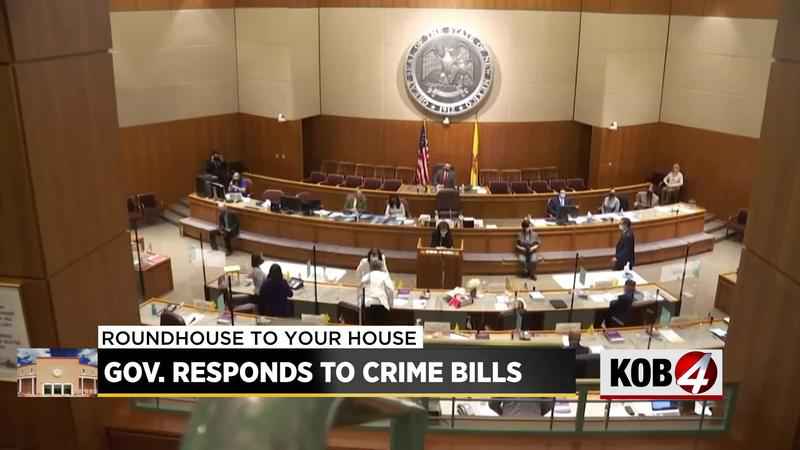 Instead, HB 5 has become an effort to let prosecutors and police access location data to try to match accused felons on pretrial monitoring with unsolved crimes.

Grubs: Is that a good substitution?

Lujan Grisham: I think it’s an effective strategy on one part, but it’s not effective when, certainly, I was talking to one of the mothers yesterday… the person who committed the crime that resulted in the murder of her son was wearing an ankle monitor. And we should be improving all of it so that those GPS systems and the actual monitoring is occurring.

There’s only a week left in the session, as both the governor and lawmakers decide what is a good idea and what is best left undone.