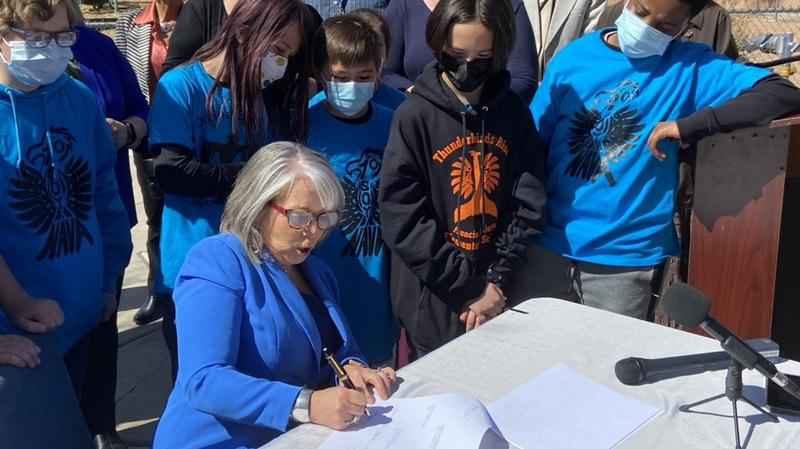 Normally, bills would be signed in the Roundhouse at the governor’s desk but on Tuesday it was outside Nava Elementary School in Santa Fe.

“Do you realize no one voted against Senate Bill 1, no one in either house or in an committee,” said Sen. Mimi Stewart, bill sponsor.

“Makes us the highest paid education system in the region, right? Higher than Colorado, higher than Arizona, higher than Utah, higher than Texas and not that it’s a competition – of course, it is because I believe in our educators,” said Lujan Grisham.

In addition to increasing teacher salary, this bill will also give a 7% raise for education staff

“We have to pay our educators a salary that is commiserate with their incredible experience, education, and the fact that they are working more than full time supporting their students,” Lujan Grisham said.

And teachers across the state are celebrating.

“We are thrilled, I think back to my time as a beginning teacher and how now teachers coming into the profession are going to have a living wage retirement, they are going to have all these things I deserved and I am so happy for them. It’s a good day for educators,” said Whitney Holland president of New Mexico American Federation of Teachers.

One bill provides an entry-level salary for teacher residents, usually in their last year of college when they start teaching in the classroom, as well as stipends of a few thousand dollars for teachers or principals who mentor them.