But just before she signed them, MMIP advocates rallied to make sure this move is just the first step. The families of missing and murdered Indigenous women and relatives said that despite national attention to the crisis affecting Indian Country, they’re still waiting for answers.

"We’ve been asking for help. We haven’t got any help," said Becky. "That’s why we’re standing here. This is all of our help."

The group rallied outside the Indian Pueblo Cultural Center an hour before the governor signed the two bills into law. They applauded the move but also said more needs to be done. 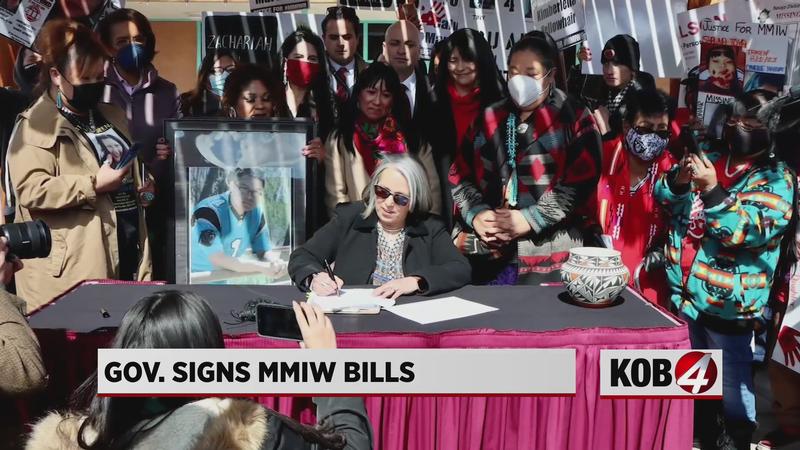 "They’ve heard time and time again, ‘We’re going to implement this policy and you’re going to get answers,’ and some families here have been waiting 35 years for answers," said Darlene Gomez, an attorney and advocate for missing and murdered Indigenous women and relatives.

Senate Bill 12 will create a missing Indigenous person specialist position in the Office of the Attorney General. That person would work with local, state, federal and tribal law enforcement agencies on these cases.

Senate Bill 13 will create a "Missing in New Mexico Event," every year, where public safety officials would share information on cases, gather statistics and release information to the media.

Advocates say they are going to continue to march and rally so their loved ones’ cases don’t get forgotten. Cases, such as Vangie Randall-Shorty’s story, that KOB 4 has highlighted before.

Shorty said the body of her son, Zachariah Shorty, was found on the Navajo Nation but she’s still nowhere close to getting justice.

"It’s happening all over, it’s happening way too many times and they’re just not being solved," Randall-Shorty said.