ALAMOGORDO N.M. — A little over a week ago, Couy Griffin made national headlines when he went on trial in Washington D.C. on federal charges to the Jan. 6, 2021 attack on the U.S. Capitol.

Griffin appeared in court Friday in Alamogordo, this time for an arraignment on a misdemeanor campaign reporting violation charge.

According to documents from the Office of the New Mexico Attorney General, Griffin is accused of failing to register Cowboys for Trump as a political action committee with the secretary of state, failing to file all required campaign finance reports and failing to pay statutory fines after receiving a lawful order to do so.

At the arraignment, Griffin entered a plea of not guilty to the charge against him. If he is ultimately convicted, he could face up to a year in prison and or a $1,000 fine. 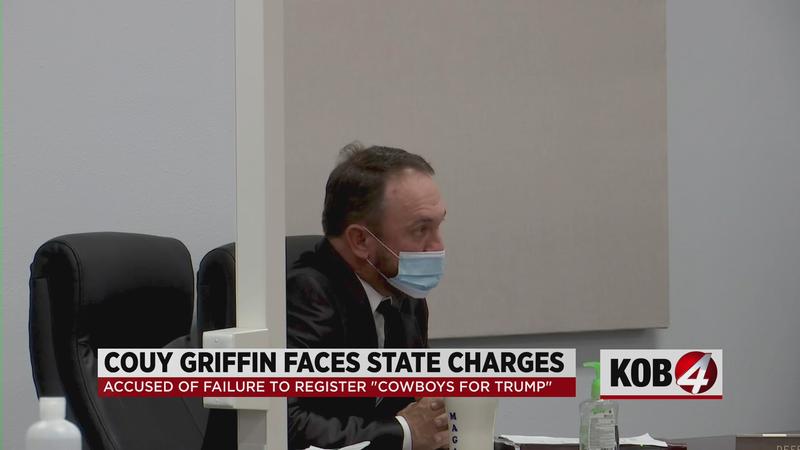 Though District Judge Douglas Driggers agreed with the recommendation by the New Mexico Attorney General’s Office that Griffin should be released on his own recognizance pending trial, the conservative activist criticized the conditions of release imposed on him as punitive.

In particular, he took issue with requirements related to his ability to possess firearms and to travel outside of Otero County without prior permission of the court.

He argued that his status as a high-profile conservative activist made him a target of threats and that firearms were necessary to protect himself and his family.

Driggers ruled Griffin could keep firearms within his residence but not possess them outside of it.

Griffin is also required to provide the court and attorney general’s office notice in advance before traveling outside the county.

He requested that no conditions be placed on his ability to travel. Driggers responded the charges were minimally intrusive and were standard when someone charged with a crime is let out on conditions of release.

As for the charge brought against him by the state, Griffin argues Cowboys For Trump is not a political action committee, but merely a group of conservatives meant to show support for the 45th president of the United States and conservative positions on a host of broad political issues.

“I wasn’t a campaign. I wasn’t writing checks. I wasn’t raising money. I wasn’t doing those things that PACs do,” Griffin said in an interview with KOB after the arraignment. He characterized the charge as a politically motivated attempt to silence his outspoken views.

“They finally feel like they have something they can charge me with and further silence me and cancel me,” he said.

When reached for comment about Griffin’s accusations, a spokesperson for the attorney general’s office declined to comment and said the state “will present evidence in a court of law” related to the case.

Griffin, who represents District 2 on the Otero Board of County Commissioners, announced earlier this month that he is not running for reelection.