Grocery store hosts cookout in Ruidoso for those without power

RUIDOSO, N.M. — The generosity of residents in Lincoln County has been overflowing since the Nogal Canyon Fire and McBride Fire started.

An Albertsons’ store in the area had been without power since the McBride Fire erupted Tuesday, and store leaders said they’re feeling the community’s pain – so they got creative.

They set up a couple of grills and tables outside the store and encouraged anyone stopping by to grab a hot lunch. Store leaders told KOB 4 they had some freezer trucks where they’re preserving a lot of their frozen foods, but it’s been tough to save everything inside of the store.

"A lot of people haven’t had heat, haven’t had the ability to cook it, so what better place to do it than here," said Dylan Oden, the Albertsons’ store director. "So we’re gonna do that as we’re out of power, we’ll just be right there."

The latest update from PNM said crews are hoping to have power restored to that Albertsons by the end of Thursday. However, there are still about 2,600 customers without power throughout Ruidoso. 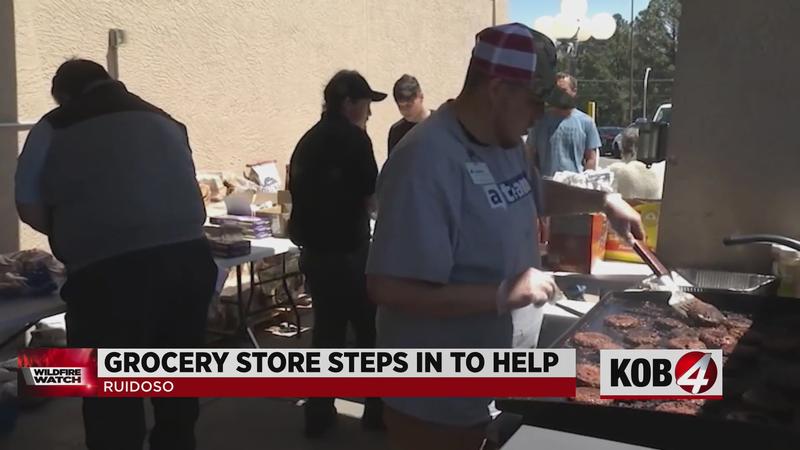 A state of emergency has been declared for the Village of Ruidoso. If you’re looking to make donations or volunteer in some capacity, please call (575) 258-6900.

All Pioneer Bank branches are also accepting monetary donations, along with Revolution 120 in Las Cruces.

The Community Foundation of Lincoln County has set up a PayPal account (on the homepage of their website) for those affected by the McBride and Nogal Fires. According to the foundation website, the money will go to those who need immediate assistance. Checks will also be accepted – payable to the CFLC and “shelter fund” written on the memo line. Checks may be dropped off at the Condotel Building located at 1103 Mechem Dr. in Ruidoso or mailed to PO Box 2750, Ruidoso, NM 88355.

Those affected by the fires who need assistance should call the Department of Homeland Security and Emergency Management at 1 (800) 432-2080. Press #2 for information or resources related to the fires. Press #4 for information regarding property damage due to the fires and other fire-related questions.