ALBUQUERQUE, N.M. — A group of neighbors in northeast Albuquerque are trying their best to make the city a more beautiful place.

Mary Erwin, who lives in the Alvarado neighborhood, started leading the charge a few weeks ago.

"I hate seeing litter everywhere,” Erwin said. “And when the wind blows, it doesn’t matter what neighborhood you’re in, the trash cans blow open, trash just gets blown everywhere."

She said she saw a neighbor’s post on the Nextdoor app about a dirty section of a bike path near Juan Tabo. She pitched in right away.

"I’m a big fan of maybe not saying ‘they should clean it up’ but when I see a problem, maybe I should do something about it,” said Erwin. “It seems like other people feel the same way."

She made her own post on the Nextdoor app, and “The Guerilla Garbage Brigade” was born.

Eighteen of her neighbors showed up this past weekend for the second scheduled clean up near the Tom Bolack Park.

"It really seems to touch a nerve for lots of folks,” Erwin said. "You can walk back through here now and it’s not dangerous, it’s not full of broken needles and stuff like so the impact is very direct."

Erwin said it’s easy to get overwhelmed by all the negativity in Albuquerque and the world right now, so it’s important to focus on the good things she can control.

"When I get overwhelmed and when I get down on the world, I think being able to do something, push yourself into action, is really the only way forward,” Erwin said. "It’s pretty simple, and it’ll feel good. You’ll feel good."

Erwin said she’ll post on the app in the next week or two about the next scheduled clean up. 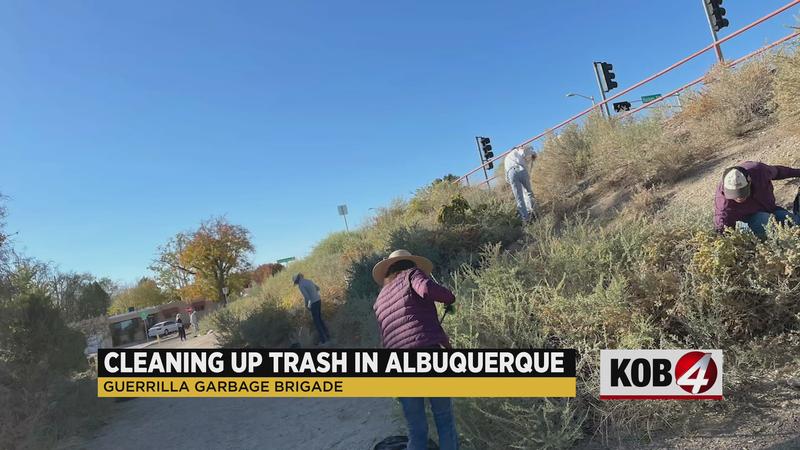