ALBUQUERQUE, N.M. – Just a couple of weeks before Halloween, someone stole decorations from a home in Nob Hill.

A video shot outside of Haley Monteith’s home showed just a glimpse of how much she loves Halloween.

“We’ve always trick or treated since I was, could walk, and I love the scariness and spookiness of it and my family at our home have always decorated,” said Monteith.

So this year she got a home of her own and wanted to bring the Halloween spirit to the neighborhood.

Monteith’s mom gave her a gift — a stack of skulls with a life of their own.

“It’s kind of like this little family thing. The skulls were named after all the kids in the family.”

Except earlier this week, she was getting home from the gym and noticed it was stolen. Monteith and her partner were a little freaked out.

“Because they probably took it while we were sleeping here, and it’s very violating for someone to come onto your porch and take something that you own, and it’s also concerning of what else they’ll do next or to the neighbor’s house or if they’re going to break in next time,” said Monteith.

Plus, the skeletons aren’t exactly easy to steal.

“He cackles at you when you walk by. He’s very cute and annoying.”

The skeletons very heavy too.

Monteith shared what happened with her neighbors, and it turns out this is nothing new.

“This happened, same thing last year, they got all their stuff stolen some people commented that their decorations got destroyed for them to find the next morning and it was more than just like pumpkin smashing it was their actual lights and decorations.”

“I remember when I was little and I would walk up to a house that had the spooky decorations and just be so excited and I was so excited to be on the other side of the door this year,” Monteith said.

And while she’ll still be celebrating Halloween, she will be playing it safe.

“I think we’ll keep the decorations out but I definitely won’t be splurging anymore, I’ll definitely be buying things that are cheaper so if they get do get taken, that’s okay, and I’ll keep the special stuff inside.”

She is determined to bring the Halloween spirit to her neighborhood, no matter who tries to spook her.

“It’s just sad that someone would come into the neighborhood, and take something so silly.” 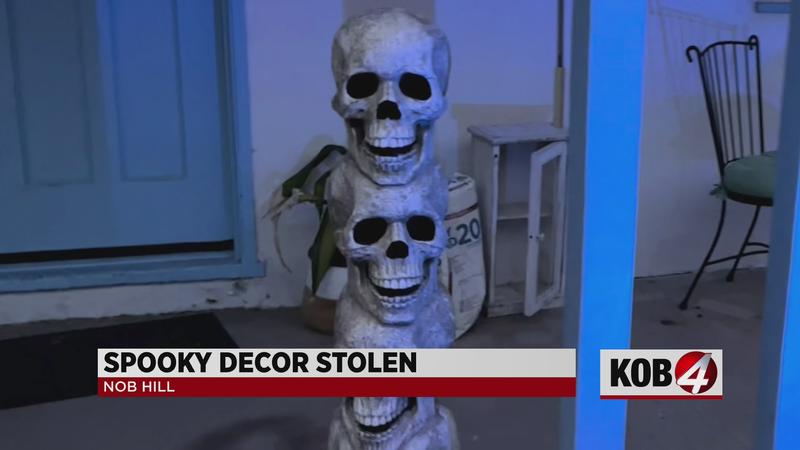