ALBUQUERQUE, N.M.- The New Mexico Attorney General is reviewing the Child, Youth and Family Department (CYFD), and it’s use of encrypted messaging technology that allows state government workers to delete their communications.

CYFD officials say they adopted the encrypted messaging app called Signal at the onset of the pandemic to better protect against cyberattacks.

"It has helped us keep that information protected, secure and also helped us work with our families and children more effectively," said CYFD Cabinet Secretary Brian Blalock.

The technology allows state workers to send messages to each other and entire work groups — some of those messages are routinely deleted. 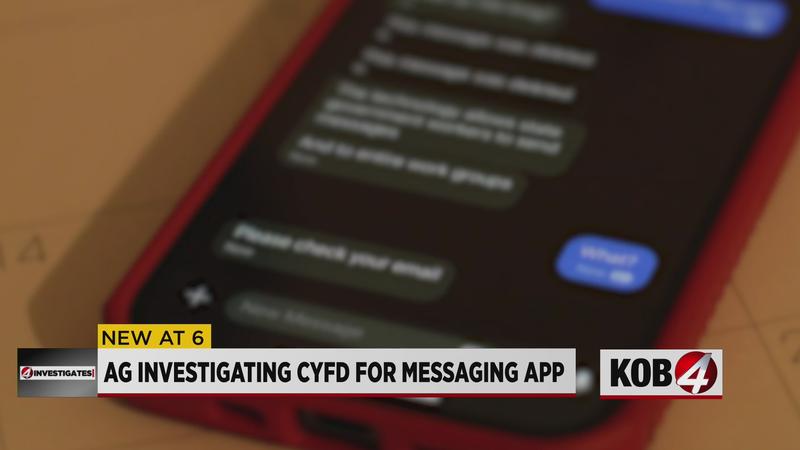 "This could present serious issues for transparency and accountability," said Melanie Majors of the New Mexico Foundation for Open Government.

"Government business is being conducted under a cloak of secrecy enabled by tech platforms," said Majors.

4 Investigator Nathan O’Neal: How regularly are messages deleted from that app?

Last fall, a whistleblower filed a complaint with the Attorney General’s office, claiming the use of the Signal app violated the state’s Inspection of Public Records Act — or IPRA.

An opinion issued in September 2020 by the AG’s office showed in that case, there was no IPRA violation. However, the AG’s office pointed out that they had not specifically weighed in on "whether the Department’s new system comports with New Mexico’s records retention laws" — which is a whole other matter.

In a recent statement, AG Hector Balderas said: "It is highly concerning that public employees are potentially deleting public information without a thorough legal process, and we are reviewing the matter."

As for CYFD Secretary Blalock, he says the Signal app has made his agency more efficient.

"I would just want to assure the public that none of these tools are intended to make us less transparent," said Blalock, adding later: "We have precautions and policies in place to be sure that we’re following the Public Records Act in every possible way. Our intent is for our agency to be more and more transparent to be sure that we’re capturing all the public records that we should be…"

The governor’s office has not responded to several requests as to whether any other state agencies are using similar technology.