PECOS, N.M. – A former high school basketball player says she was publicly humiliated by administrators, all because of who she sat next to on a school bus.

De Anza Dimas said she was forced off a bus because she sat next to her girlfriend. She told KOB 4 it’s all because of an unofficial, unwritten policy that she wants to get rid of for good.

“You know, school is supposed to be considered a safe environment for students to engage freely, and be who they are without the worry of being humiliated,” said De Anza Dimas, former Pecos High School student.

But just months before she graduated in 2019 – she said she was targeted by administrators because of her sexuality.

"We were leaving the basketball tournament and before we were leaving, another female athlete and I were asked to step off the bus by the athletic coordinator. He then took us into the gym and questioned if we were in a relationship,” said Dimas.

They stayed silent, but when he asked again, she said yes.

"Then he asked if it was appropriate for us to be sitting together next to each other, and then obviously I said no because that’s what he wanted to hear,” Dimas said.

That’s when he reportedly told them to find another seat.

“I was shocked and embarrassed when I had to face my teammates when I got back on, and that’s you know, no one wants to be questioned why, and what happens.”

According to a new lawsuit filed earlier this month, administrators claimed Dimas and her girlfriend violated a school policy, that prevented couples from sitting next to each other on school buses.

But Dimas says that unwritten rule was only enforced against same-sex couples.

"I didn’t understand why, why school administrators have the right to invade themselves into student’s personal lives that include sexual orientation and gender identities."

The lawsuit says the school agreed to drop the policy after lawyers got involved, but Dimas and the New Mexico Legal Aid want to take things a step further.

"We want to make sure that this abhorrent policy will never be enforced against any future students of this high school, or anywhere else in New Mexico," said Derek Garcia, attorney at New Mexico Legal Aid. "Schools should be a source of refuge, not a source of humiliation and an invasion into the private lives of students.”

Dimas says she has not received an apology from anyone involved in the incident.

"You know, it’s just not even about the LGBTQ community. That’s a big point of it, but I’m sure that for, say, a straight student wouldn’t like being questioned if they were gay. Whether it be true or false,” she said.

KOB 4 reached out to Pecos Independent Schools and the former athletic coordinator named in the lawsuit for comment, but have not heard back. 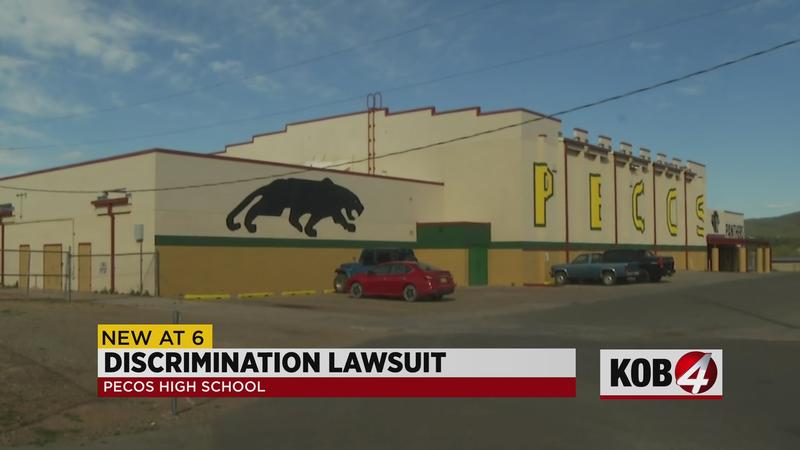