SANTA FE, N.M. — In Santa Fe, crews spent the day cleaning up storm damage. However, it’s the damage at the St. Francis Cathedral that has everybody talking.

A spruce tree that stood tall in front of the church was not strong enough for the wind. It toppled down – but will soon have a new life.

"We’re all very shocked by this, it’s just really sad that such a beautiful tree that we just hung the star on… is now gone," said Athena Beshur with Seeds of Wisdom LLC, the cathedral’s landscaping firm.

The big branches knocked down the cathedral’s sign and broke some lights, but Beshur said it could have been much worse.

"It’s a sad moment, but we’re also very grateful that the church didn’t get damaged," Beshur said. "A huge tree did not affect any of the statues behind me, so we feel really grateful about that. The tree was about 56 feet tall, so that’s just an indicator of what damage it could’ve caused." 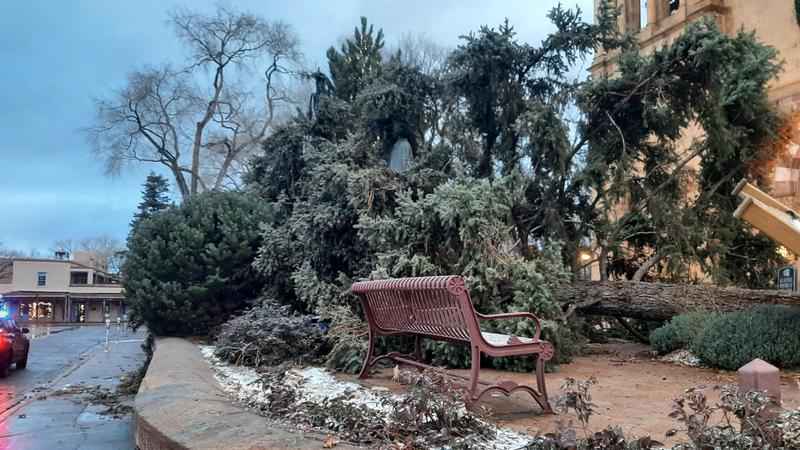 KOB 4 was there as crews hauled off the tree’s roots, right across from another large tree that fell behind the cathedral. Beshur said they’ll plant a new tree out front and watch it grow – just like the fallen one did over the decades.

But the old tree won’t go to waste:

"This was a beautiful, old tree and beloved and so some people came and got some wood for firewood, other woodworkers and furniture makers are now going to be able to use some of that wood," Beshur said. "So we’ve contacted a few people, I got text messages at 7:30 this morning saying, ‘can I have a three-foot piece of that wood?’ so we are going to share it, some of it is mulched and that will be used around the church grounds. So we are using every part that we can."

The storm also did some damage to the Santa Fe Regional Airport, causing delays. Strong winds ripped the door off one of the hangars and slammed it into another one nearby, before it took out a fence. The wind also scattered tree limbs onto the runway and damaged parked planes.

"This is the first time since I’ve been here that we’ve had this kind of extensive damage, especially to aircraft and hangars," said Mark Baca, a manager who has been with the airport for 30 years.