HOBBS, N.M. — 18-year-old Alexis Avila will not stay in jail until her trial. Lea County Judge William Shoobridge is putting her on house arrest. There are several conditions of release:

Surveillance video appears to show Avila throw a bag into a Hobbs dumpster last Friday. Investigators said her newborn baby boy was inside that trash bag.

Hours later, three people searching that dumpster found the baby alive – and he is still recovering in the hospital.

Throughout the hearing Wednesday, Judge Shoobridge reminded everyone in the courtroom that this decision is not based on whether Avila is guilty or innocent.

"Once again, the issue is whether or not Ms. Avila is a danger, and, if so, what are the least restrictive means of protecting the community?" he said.

Judge Shoobridge also said the GPS monitoring company will report directly to him, so if anything is out of the ordinary, he will immediately issue a warrant and Avila will be in jail until trial. 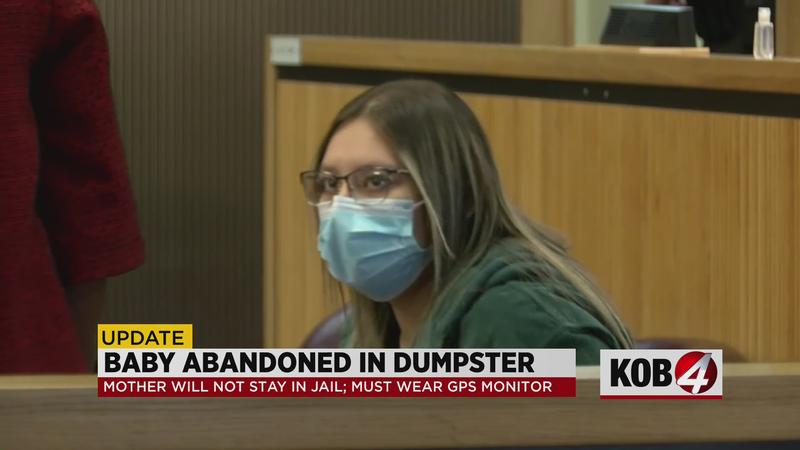 The pretrial detention hearing lasted about two hours. The state called seven witnesses to testify – including the three people who found the baby in the dumpster and the local business owner who provided surveillance video of the discovery.

They also called two Hobbs police officers who responded to the scene, including the officer who accompanied the baby at the hospital and the detective who interviewed Avila the same day she admitted to giving birth and throwing the infant in the dumpster.

The state played two angles of the surveillance video and the 911 call from the three strangers who found the child. The state also showed several crime scene photos, including one of the baby boy just minutes after the group pulled him out of the trash bag.

Judge Shoobridge said it’s very rare to see such overwhelming evidence against a defendant – a confession, paired with video that supports it. He admitted that Avila poses a threat to others in the community.

Avila’s defense team made a very brief statement after the hearing, saying they’re happy with the court’s decision. The court still has to schedule a preliminary hearing to decide which charge the state will pursue – either attempted murder or felony child abuse.