HOBBS, N.M. — Investigators are sharing new details about what led up to the miraculous discovery. KOB 4 is learning more about the teenage mother and the ongoing search for the newborn’s father.

Police said three people found the baby alive Friday night as they were searching a dumpster for valuables. According to authorities, the baby was found wrapped in a dirty towel with the umbilical cord still attached. The newborn is now in stable condition at a hospital in Lubbock, Texas, in CYFD’s custody.

Police said surveillance video shows 18-year-old Alexis Avila pull up to a dumpster behind a mall in Hobbs, throw out a black trash bag and then drive off.

Hours later, the video shows the group of three people searching through the same dumpster. They find the black bag, open it, and the woman in the group immediately starts tending to the infant.

The group called 911 and all three talked to dispatchers about the situation. Click on the video at the top of this page to listen to that 911 call. 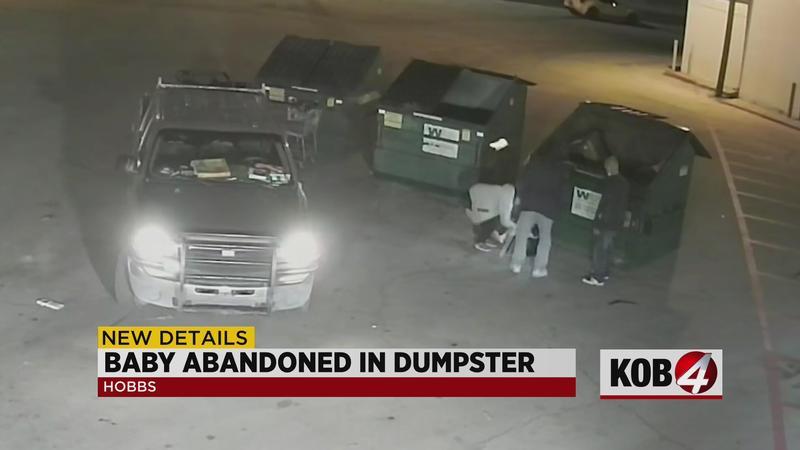 Police arrived on scene minutes later. The baby was taken to a Hobbs hospital before he was airlifted to a hospital in Lubbock. According to court documents, when police arrived, the baby’s temperature was so low that it didn’t register – indicating hypothermia.

The baby was also given a blood transfusion, put on a feeding tube and given oxygen.

From the video, police tracked down Avila’s car, and said she willingly went to the police station for questioning Saturday.

Avila told police she didn’t know she was pregnant until Jan. 6, and then she unexpectedly gave birth a day later.

"Alexis was asked by investigators what she thought would eventually happen to the baby by placing him inside of a plastic bag and dumping him," August Fons, Hobbs Police Department acting police chief, said. "Alexis remained silent and could not answer."

Avila was charged with attempted first-degree murder, or alternatively, second-degree felony child abuse. The district attorney will decide which charge to move forward with during Avila’s first court appearance.

Police said Avila identified who she believes is the father of the baby – a juvenile who police are still trying to track down for an interview.

Avila is currently out of jail on an unsecured bond and is scheduled to have a pretrial detention hearing Wednesday.

“Alexis is barely 18 herself. Whatever happened is already a tragedy for her family and the community. As humans, we should practice compassion as we wait for the justice system to work.”

NMCYFD also says donations are accepted each and every day to combat the ‘dire need’ for items to support children of all ages in their care.