As a professional hockey player, Scott has tough training to stay in shape on the ice, and he said training for flying is surprisingly similar.

“Whether it’s being able to put yourself in that pressure, be able to hold onto your stomach or whatever it is and then hockey the same thing, there’s a lot of physical attributes,” said Scott.

Pilots train their core, neck and back, and most importantly, how to tense their lower body to push blood back up to their head so they don’t pass out.

Both Scott and Patrick took a look at New Mexico from above at faster than the speed of sound. 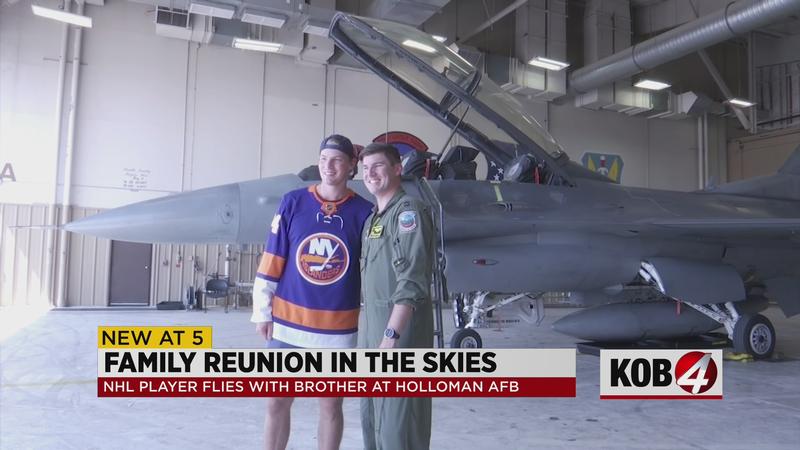 "It’s an experience I’ve never really gotten to have so it’s pretty awesome, that’s really the best part about it as we never get to do that,” said Patrick.

Their parents, Andy and Jane Mayfield, were there to watch as well.

"It was a little nerve-racking, kind of like when the older brother takes the younger brother in the car for the first time, your like ‘just don’t do anything that scares him too much,’” said Jane.

Scott survived the whopping 8 G’s they pulled, equaling to 850 mph.

"I definitely think I’m sweating more now than I do after a hockey game and that’s for sure, so it’s definitely a different feeling the amount of pressure on you, I didn’t fit the best I don’t think like in the seat I was a little big for it," said Scott.

Scott is 6’4, barely making the cutoff to fly, but Patrick said he couldn’t have been more thrilled.

"I didn’t make him sick or make him pass out or anything, but that wasn’t the goal, so just really happy,” said Patrick.