CARLSBAD, N.M. — The war in Ukraine and the death and displacement it has caused might seem worlds away from southeast New Mexico.

But Johnny Chandler, who operates the Trinity Hotel and the Balzano Family Vineyard, both in Carlsbad, says the war has spurred discussion among his customers.

“There is not much that has been spoken about in the last three or four weeks that is not related to what Russia is doing to Ukraine currently,” Chandler said.

Both the Trinity Hotel and the Balzano Family Vineyard are doing their best to assist Ukrainians. This Saturday, all money from items purchased from the vineyard or the hotel restaurant will be donated to World Central Kitchen. The online travel company Trip Adviser will match all donations.

World Central Kitchen is a nonprofit that specializes in raising funds to feed people impacted by natural disasters or war-torn nations, such as Ukraine. 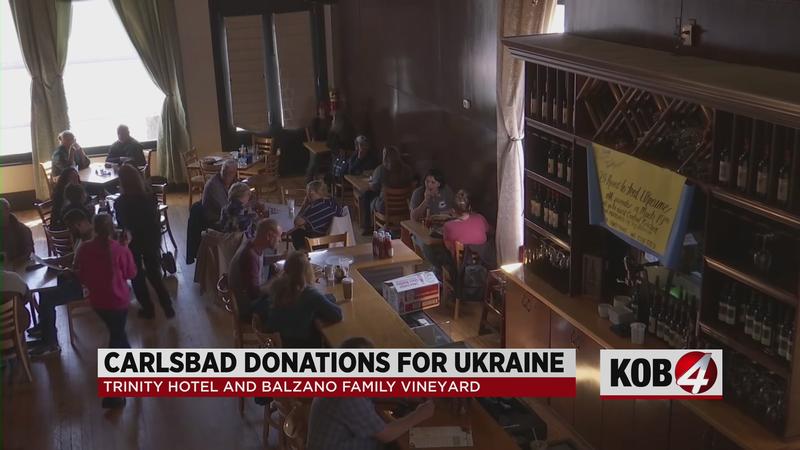 According to the United Nations, more than 3 million people have been forced by the war to flee to neighboring countries in the last three weeks.

Chandler says the fundraising push is part of a global effort undertaken by restaurants to ensure those who have been displaced by the war have access to food. He added it is a way to show opposition to Russia’s widely condemned military aggression.

“We can’t pick up a gun for Ukraine but we can help feed Ukraine and that is what we are doing,” he said.

Toni Balzano, whose parents own both the hotel and vineyard, and who helps operate both establishments, says any money raised this week will be on top of more than $5,000 the hotel restaurant has raised over the past few weeks for World Central Kitchen through the sale of desserts.

Balzano said they are just doing their part to ease the suffering in a land ravaged by war.

“It’s just one tiny little thing, that we can do to help and we hope that it does,” she said.