Rabbi Berel Levertov says he was alerted Thursday to a harmful piece of graffiti at the Santa Fe Railyard.

"I came by and I saw it, and it said ‘Vax the Jews’ and it was very disturbing to see that… and it didn’t feel good,” he said. "We live peacefully, we don’t have any anti-Semitic occurrences, people are very respectful to each other and for someone just to damage a property, and write a property, and write something against the Jews, or against any ethnic group is really disturbing for me, as a Jew, it really felt hurt, and we felt we have to do something about it."

“His thought was that we should make a statement to stand in solidarity with the Jewish community and so we would like to put a menorah in place there to make sure folks know that there’s no room for that sort of divisive language, hateful language here in Santa Fe,” Klain said. 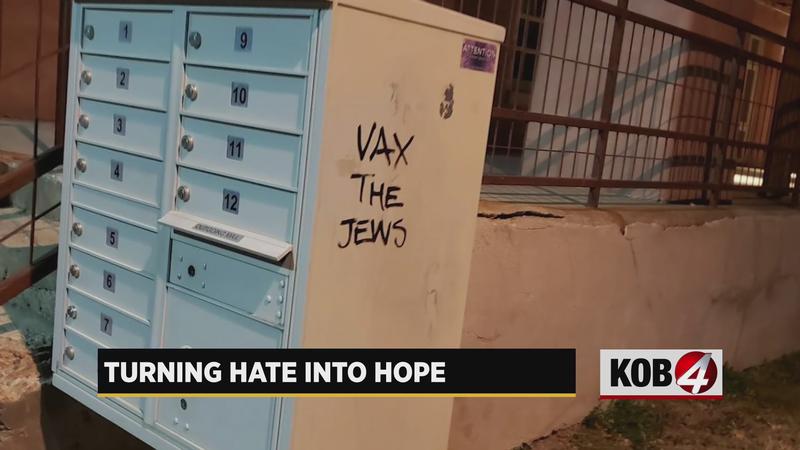 The Santa Fe Jewish Center is planning to place a 6-foot tall Menorah right next to the spot where the message was written. They are still working out the details, but they want to put it up for Hanukah in early December.

Levertov says the Menorah will give off more than just light.

“Menorah’s are a symbol of freedom, a symbol of perseverance… we put Menorahs all over the world particularly in Santa Fe, we put them on the plaza and there will be another one right over here to show that Jews are strong, we’ve gone through a lot in the last 3,000 years, but our lights are still shining,” Levertov said.

Klain says Barker Realty is proud to offer up its sidewalk as a way to bring the community together.

"We’re a locally owned business, and being part of the fabric here means you support all of the groups that live here, and I think one of the attractions of Santa Fe is that it’s been such a great melting pot for so long, and so anytime a group gets singled out like this, you have to stand in solidarity,” he said.

KOB 4 reached out to Santa Fe police about the incident but has not received a response.