SANTA FE, N.M. (AP) — A federal freeze on most evictions enacted last year is scheduled to expire Saturday, after the Biden administration extended the original date by a month.

The moratorium, put in place by the U.S. Centers for Disease Control and Prevention in September, was the only tool keeping millions of tenants in their homes. Many of them lost jobs during the coronavirus pandemic and had fallen months behind on their rent.

Landlords successfully challenged the order in court, arguing they also had bills to pay. They pointed out that tenants could access nearly $47 billion in federal money set aside to help pay rents and related expenses.

Advocates for tenants said the distribution of the money had been slow and that more time was needed to distribute it and repay landlords. Without an extension, they feared a spike in evictions and lawsuits seeking to boot out tenants who were behind on their rents.

Even with the delay, roughly 3.6 million people in the U.S., as of July 5, said they face eviction in the next two months, according to the U.S. Census Bureau’s Household Pulse Survey. The survey measures the social and economic effects of the coronavirus pandemic every two weeks through online responses from a representative sample of U.S. households. 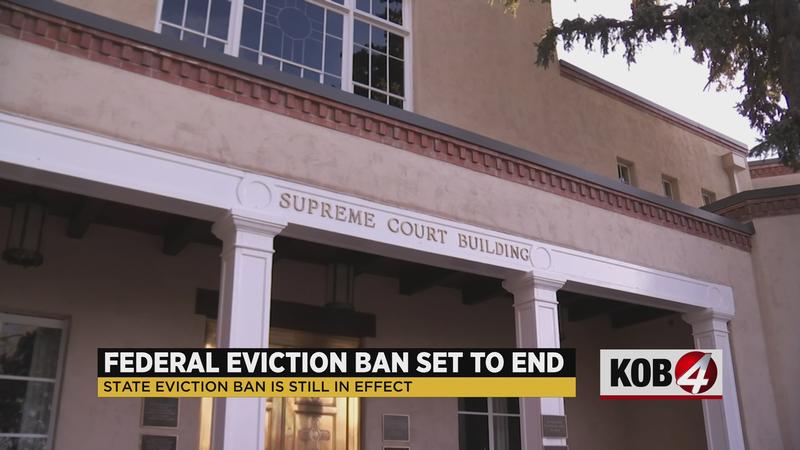 WHAT’S THE STATUS OF EVICTION MORATORIUMS IN THE STATE?

New Mexico enacted a moratorium last year halting eviction proceedings. It covers evictions for tenants who are unable to pay rent. Evictions continue for other reasons. The state Supreme Court will decide when to lift the state moratorium and has not set an expiration date yet.

The federal government has allocated up to $284 million in rental assistance to the state of New Mexico and independent efforts by two major counties to help tenants with outstanding rent, utility payments and other expenses. The money can go toward 15 months of rent and other expenses, including internet access. The federal government may sweep away unused money if authorities are slow to dispense the aid. So far, the state estimates it has distributed at least $17 million in rental and utility assistance, acknowledging concerns that many eligible tenants may not have applied.

HOW ARE THE COURTS HANDLING EVICTION HEARINGS?

Statistics from the New Mexico Administrative Office of the Courts say evictions fell by 40%, or 1,977 annual evictions, for the 12-month period ending in February from the same period immediately before the pandemic struck.

WHAT IS THE AFFORDABILITY IN THE STATE’S MAJOR RENTAL MARKETS?

New Mexico’s current vacancy rate is similar to the roughly 7% national average, though the housing market is much tighter in Santa Fe.

ARE EVICTIONS EXPECTED TO CREATE A SURGE IN HOMELESSNESS?

It’s hard to say how much homelessness will increase in New Mexico. One indication of the scope of the problem is census data showing 23,037 state residents concerned that they could be evicted over the next two months.

The U.S. Department of Agriculture (USDA) announced Friday that the eviction moratorium for homeowners of properties financed or guaranteed by the USDA will be extended through September 30. The single family foreclosure moratorium will still expire July 31.