How the Texas abortion ban could impact New Mexico

ALBUQUERQUE, N.M. – Texas now has the strictest abortion law in the country.

The law bans abortions once a heartbeat is detected in a fetus – usually around 6 weeks. Unlike other states’ anti-abortion laws, Texas’ ban bars state officials from enforcing it. Instead, it allows people to sue an abortion provider or anyone who may have helped someone get an abortion.

Some say the new law will lead to an increase of women seeking abortions in neighboring states, including New Mexico.

Pro-choice advocates said Texas has almost completely banned abortions with its new law and that will have an impact on neighboring states like New Mexico.

"Many many many women won’t know they’re pregnant yet at 6 weeks, so it has the practical application of banning abortion in Texas for all intents and purposes," said Vicki Cowart, president and CEO of Planned Parenthood of the Rocky Mountains.

Cowart said they’re already seeing women from Texas coming to New Mexico to have an abortion.

"Yesterday, for example, we only had patients from Texas at our Albuquerque health center, so patients were just getting a jump on the situation and driving over to Albuquerque to have their abortion,” she said.

"These abortion clinics in New Mexico are going to see an increase in traffic, unfortunately for unsafe and unregulated abortions,” said Elisa Martinez, executive director and CEO of the New Mexico Alliance for Life.

Meanwhile – Martinez said her organization will continue to advocate options other than abortion for women.

"We can address the issues that are driving women to go through an abortion that they don’t really want to have to go through,” she said. 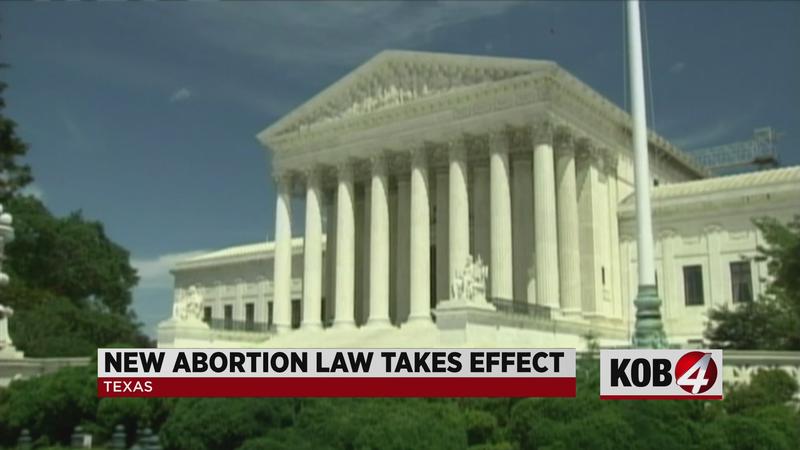