How will the Colorado River water shortage impact New Mexico?

ALBUQUERQUE, N.M. — For the first time ever, federal officials have declared a water shortage on the Colorado River.

"There’s no surprise here," said John Fleck with the UNM Water Resources Program. "We expected this to happen eventually, or we knew the was a possibility that we needed to be ready for. Folks in the Lower Colorado River Basin who depend on this water, especially in Arizona, they’re ready for this, they know what to do. They know who’s going to take shortages and there will be some communities that are harder hit than others, but this is not the apocalypse at the end of the world for any of those communities."

So what does the water shortage mean for New Mexico and other western states?

New Mexico sees water shortages all the time, depending on the amount of snowfall in the mountains. 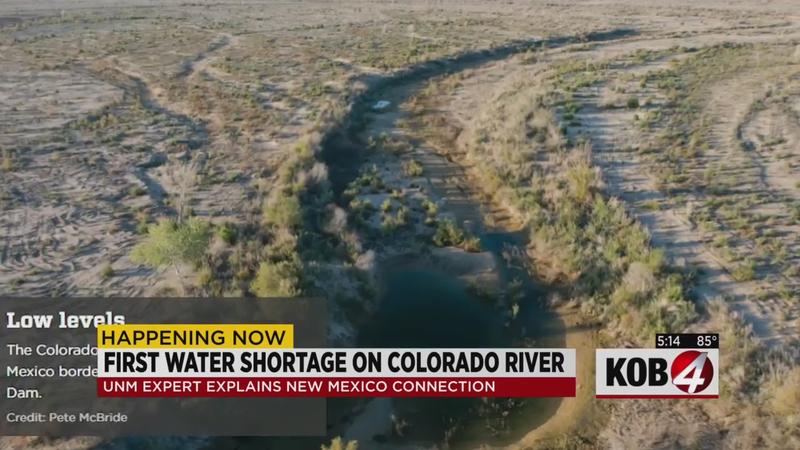 "We had a shortage this year in New Mexico," Fleck said. "As part of the Colorado River, we get water through what’s called the San Juan Chama project, which carries watter in tunnels beneath the Continental Divide for us here in Albuquerque. We only got about a 60% allocation this year. Nature imposed that shortage, not the government."

There are backup supplies such as groundwater in areas including Albuquerque. Water researchers said the most important thing for New Mexicans in the long run is to come up with a plan for our portion of the Colorado River Basin. Right now, there isn’t one.

"Among the states that we share this part of the basin with — Colorado, Wyoming, Utah and New Mexico — there’s a lot of discussion about what that might look like," Fleck said. "And those are hard discussions, right? Because nobody wants to give up water, like we need as much as we can get. So you don’t want to sort of volunteer, say, I’ll go first. We’ll take less right? Nobody wants to go first."