Hundreds flee Mora County, as many homes burn in wildfire

MORA COUNTY, N.M. — Hundreds of people are leaving their homes in Mora County, according to people who live there, as fire officials warn the Calf Canyon Hermits Peak fire may push north into their neighborhoods.

Local leaders told KOB 4 on Monday that the fire has already destroyed “many” houses in the county, and “hundreds” of others are at risk – County Commissioner Frank Maestas estimates 200-300, others say the number is much higher.

“Many people have lived there for centuries,” Maestas said. “We’re talking very modest homes – small ranches, farms. A few are large, and a few are expensive, but as a whole, it’s a poor county.”

This area is known for its beauty, but it is one of the poorest counties in the entire country.

Residents told KOB 4 that hundreds of people there have already evacuated. 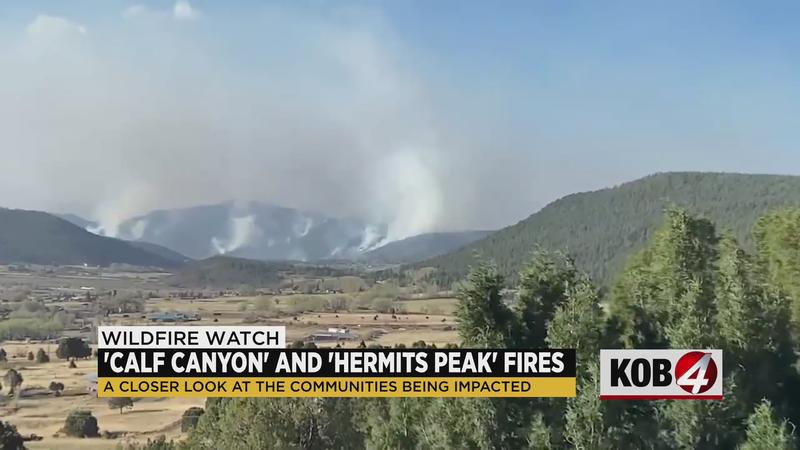 There are short-term needs, as many people don’t have enough money for a hotel room, and there are already long-term concerns, because many don’t have homeowner’s insurance.

“Financially, they are stressed. They are at a breaking point,” he said.

As families wait to find out whether they’ll have a home to return to, they need help – right now.

A group of volunteers in Albuquerque is among those connecting people with whatever resources they can find.

“It’s extremely, extremely sad,” said Antonia Roybal-Mack, an attorney in Albuquerque. “People don’t want to leave. This is all we have.”

“We need massive action because this is a massive crisis,” she said.

She said people are calling her with urgent pleas for help.

She added that Heritage Hotels has been helping with low-cost rooms.

She’s asking New Mexico leaders to lean more heavily on the National Guard, to help at road blocks and evacuation sites, which would take pressure off of strained sheriff’s offices and fire crews. She’d also like the state to use rental assistance or other housing help.

They added that the state is working as quickly as possible on more housing options for evacuees.

The governor’s office also wants people to know that help from FEMA for individuals doesn’t begin until after a fire event is over, and it can be a lengthy process, adding that the office is, “… using every available tool and technology to document the damage that we know New Mexico communities have sustained in order to expedite the disaster declaration process.”

On the statewide level, FEMA has approved Fire Management Assistance Grants for the fire. They will remain in effect from the date issued until the fire is 100% contained.

In the meantime, communities are stepping up to help one another.

“Mora is a strong community,” Maestas said. “When things like this happen, they come together.”

“There’s been extreme and incredible generosity from New Mexicans. We have seen our community come together in an incredible way,” Roybal-Mack said.

Local leaders are pleading with people to leave their homes if officials ask them to.

They said they’re doing everything they can to connect people with federal, state, local and grassroots assistance.

Local officials want to make sure people know that there’s a shelter at Peñasco High School.

Roybal-Mack and other volunteers have organized a 12:30 p.m. daily meeting over Zoom for people seeking assistance. Here’s a link to that meeting, and here’s the other information:

New Mexico officials point to the Salvation Army as an organization people can donate to, to help evacuees.

State Rep. Roger Montoya, who has been on the front lines of the fire, points toward All Together NM for donations.

KOB 4 will also be hosting a Pay It 4ward hotline for all the New Mexicans suffering with wildfires. The hotline will run Wednesday night from 5 p.m. to 7 p.m. on KOB 4.