Hundreds gather at APS headquarters for ‘Let Us Play’ protest

ALBUQUERQUE, N.M. — A crowd of students, parents, and coaches gathered at APS’s headquarters Sunday where they called on school leaders to allow school sports resume.

“Man, to play with my brothers one more time would mean the world to me,” said Castle Brownell, a senior at Cibola High School.

Last week, the APS Board of Education voted down a motion to implement hybrid learning, forcing students to remain hybrid for the rest of the school year.

“A lot of the people other students at APS are feeling neglected and ignored after the results of that meeting this past week,” said Connor Baca, a student from Eldorado High School.

As a result of the vote, APS student athletes will not be allowed to participate in their sport per the NMDOH’s guidelines. 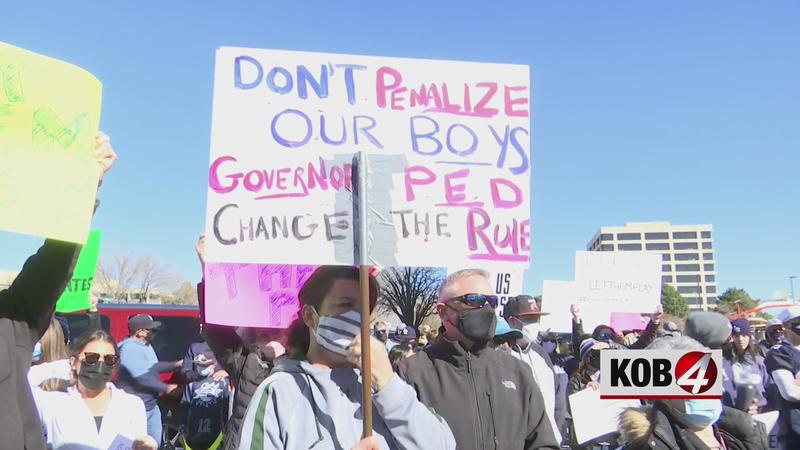 “Nobody’s trying to do anything unsafe. Nobody’s trying to do anything that keeps one group down over another. That includes the governor all the way down, but these plans are not working. These plans are not right. We have evidence around the city, around the state, around the country that this can be done safely and securely,” said Brandon Back, La Cueva High School head football coach. “It’s time to come out of halftime with a good halftime adjustment and change some plans and move forward.”

“We have not had a single case in our program, so it is doable and extremely possible,” Brownell added.

One mother who attended the protest said she’s going to continue fighting for student athletes.

"I’ll tell you right now, I get really emotional about this because I really care about you kids and it breaks my heart that this is not happening for you,” said Crystal Franco, a mother and candidate running for APS Board of Education, District 6.

"I don’t believe the importance is being put on kids first, which is the very first thing in the oath of a board member,” she added.

The crowd of about 300 people took turns voicing their opinions with the hopes of getting APS leaders to reconsider.

An APS spokesperson sent KOB 4 the following statement about the protest:

We are sorry for all the losses the pandemic has caused. We continue our relentless efforts to adapt to the daily challenges and will not give up. Until then, please know we are also eager to resume campus life. We want to see students in classrooms, on sports fields, and with their friends. We are not giving up.