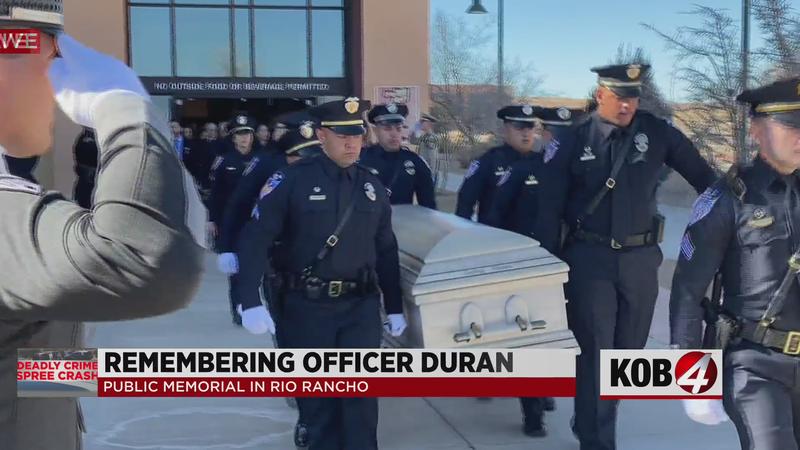 For the first time we heard from Robert Duran’s family – his sister, nephew and cousin spoke at the memorial – but it was more than just family who got up in front of this crowd. People also heard from Duran fellow officers who say he was more than a brother in blue.

As music from bagpipes filled the auditorium, Duran’s wife and two sons followed close behind their father’s casket. As the audience of service and community members looked on, a slide show filled with pictures of a smiling Duran played out over the music

“I never saw him not smiling and it wasn’t a normal smile and I confirmed this with his family and those who worked with him if he smiled at you, you had to smile back,” said Paul Joye, Santa Fe interim police chief.

A contagious smile everyone remembers fondly.

“It’s hard for me right now to even comprehend that I’m writing a eulogy for my brother,” said Angela Gamino, Robert Duran’s sister. “Rob, you gave the ultimate sacrifice and I don’t know how I will do life without you, we have always been at each other’s side for all these years.”

While giving her eulogy, Gamino brought up the last conversation she had with her brother.

"I’ll let it be known that one of the last conversations I had with my brother was the frustration with the revolving door and the lack of accountability in our state. It made him feel unappreciated,” she said. “This tragedy is so senseless it’s so unfair, I need my brother here, my nephews need their dad. And my sister-in-law needs her husband."

The "revolving door" that Gamino mentioned is the idea that so many offenders in the state are free and don’t face the kind of justice prosecutors and police often say they should.

Police say the suspect who is responsible for the death of officer Duran fits in that category. Jeaninne Jaramillo, who is accused of leading police on the high speed chase last week, has been accused of similar incidents in the past that resulted in nothing happening. Those cases were dismissed.

Gamino said the state needs to step up and protect those who protect the community.

“There is quietness on my phone, there is someone missing on the team, there is silence on the radio, there’s an emptiness in the building, you are missed,” said Chavez.

KOB 4 spoke with those in the community who say they didn’t know officer Duran personally, but wanted to be there to honor him Saturday.

"It was a tragedy in what happened and I am here to support not only him but the rest of these officers because these guys go through a lot of danger out there," said Robert Salazar, Rio Rancho Resident.

21 shots rang out over the crowd as taps began to play. And officer Duran, carried by his brothers in blue, began his final trip to Santa Fe – his family holding onto the flag that covered his casket.

As his casket was carried out, officers and first responders from across the state – Santa Fe, Albuquerque, Hobbs, Roswell and Farmington – all stood and saluted their fallen brother.