Is maple syrup the new green chile in New Mexico?

ALBUQUERQUE, N.M. – Green chile might have some competition for New Mexico’s state food as some agricultural experts believe it’s time for the state to start producing and tapping into the maple syrup business.

One professor at New Mexico State University is teaming up with other agriculture experts across the Rocky Mountains to bring maple syrup production out west.

When you think of maple syrup and where it comes from, New Mexico probably doesn’t top the list like places up north, say Canada or Vermont. Walking down the aisle at the grocery store, your options for maple syrup almost all come from out east.

But there are a handful of folks right here in the Land of Enchantment trying their luck at making their own maple syrup.

“Here is a sample from Taos,” Dr. Rolston St. Hilaire said holding up a small container of golden syrup. “This is maple syrup from a box elder. It’s got a nice flavor too, it’s delicious.”

Dr. Rolston St. Hilaire has spent his career studying maple trees. When he moved down to New Mexico and started teaching at NMSU, he wondered if he could get syrup from the trees down here.

“So, I’ve tapped my own research trees and I was sort of astounded that I got sap,” St Hilaire said.

When people think of plants in New Mexico they think of Juniper trees and Hatch green chile. But St. Hilaire is working to add maples to that list.

“The reception has been overwhelming actually, there are a couple people, a few craft people, who have seen it on the internet and YouTube, people tapping maples, so there are a few people out here who know this can be done,” St Hilaire said.

New Mexico has multiple native species of maple trees, from the Box Elder to the Bigtooth maple. St Hilaire says this variety could lead to some interesting new types of maple syrup.

“Based on the number of trees and the diversity of the species we have we certainly can make syrup and I think it is possible to have a viable maple syrup industry in New Mexico,” St Hilaire said.

While you can make maple syrup down here in the southwest it might take a long time for us to get on the same level of maple production that we see in Vermont or Maine.

“It may not be possible to rival them in head to head, but like everything else we could create a craft market. For example, we have Hatch chile here so think about a maple syrup infused with our chile that could be a big craft product from New Mexico!” St Hilaire said.

Now, St. Hilaire and his colleges want anyone who has maple trees in their yard and want to learn how to tap the trees – to contact him at his email address, rsthilai@nmsu.edu. Because they are planning workshops to show folks how to get the sap out of the trees and give them a free maple tapping kit, so you can get started right away. 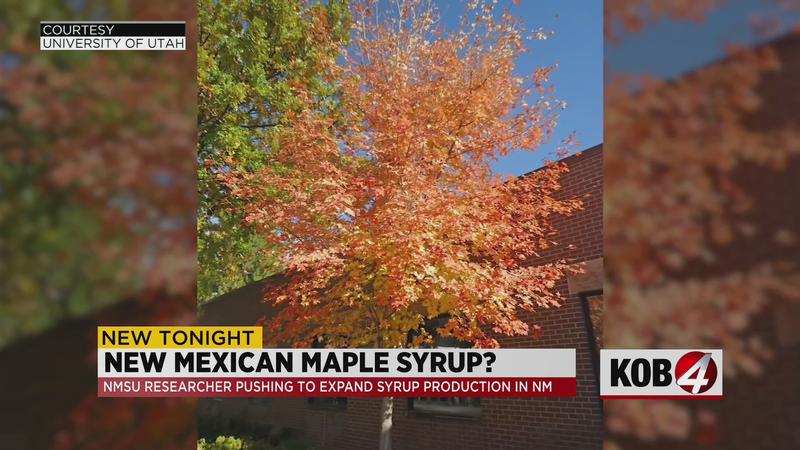