GRANTS, N.M. — Jeannine Jaramillo –the woman accused of lying about getting kidnapped, leading police on a pursuit on I-25 in Santa Fe, and causing a crash that killed two first responders – faced a judge again Friday.

This time, the hearing was for what she’s accused of doing in Cibola County months earlier. Both cases involve stolen vehicles, and one of them sounds very similar to the deadly situation in Santa Fe.

Prosecutors asked a judge to hold Jaramillo in jail pending trial. Both cases were expected to be heard Friday, but the court didn’t make it through the first one because they ran out of time, so no decision was reached.

The judge heard from deputies who followed Jaramillo on a wild chase last September. That’s when she claimed she was forced to flee because she was kidnapped by a man and held at knifepoint.

"I only observed one person in the vehicle," said Julian Armijo, a deputy with the Cibola County Sheriff’s Department. 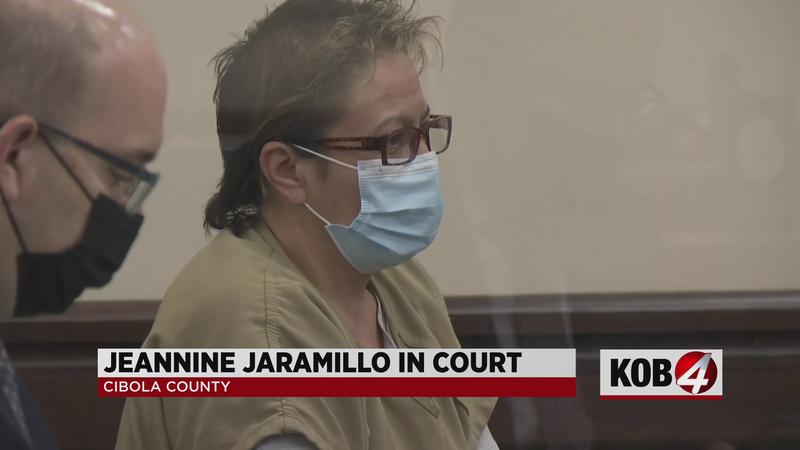 Lapel camera video shows Jaramillo telling deputies her kidnapping story that day, with very similar details to the story she told Santa Fe investigators the day of the fatal pursuit that killed Santa Fe police officer Robert Duran and retired Las Vegas firefighter Frank Lovato. In that case she claimed she was kidnapped, but investigators said she was driving alone that day, too.

Armijo said Jaramillo was driving very fast through Cibola County back in September.

The judge heard from a total of three witnesses Friday for the car chase that happened in October. The last witness was still being questioned by prosecutors when the state asked for a continuance at around 5:15 p.m.

The defense agreed and the judge granted it. The court will finish up both cases at a later date. As for now, Jaramillo is being transferred back to Santa Fe where she will remain behind bars.