KOB 4 did not know what those questions were in advance. Mayoral candidate and Bernalillo County Sheriff Manny Gonzales used that opportunity to get personal with incumbent Tim Keller.

Gonzales: Mayor Keller, where’s your accountability? There are serious misconduct allegations at City Hall, under your watch. Allegations of your own domestic violence incident being covered up by high-ranking city officials.

Reading from a piece of paper, Gonzales also accused the mayor of sweeping a city worker’s DWI under the rug.

Gonzales: A third is also you having allegations of having an affair with a city subordinate. How can the public trust you to fight crime in Albuquerque, when you can’t even fight crime in City Hall?

The Gonzales campaign alleges they are awaiting public records responses to confirm "direct knowledge" from "two high-ranking members" of APD who, according to the campaign, also allege sexual harassment and workplace misconduct occurred.

These rumors have been circulating for months. KOB 4 received multiple tips, but the 4 Investigates team went to search for records or documentation that police were called to the mayor’s house, and came up empty-handed. The tips never provided any documentation or proof. 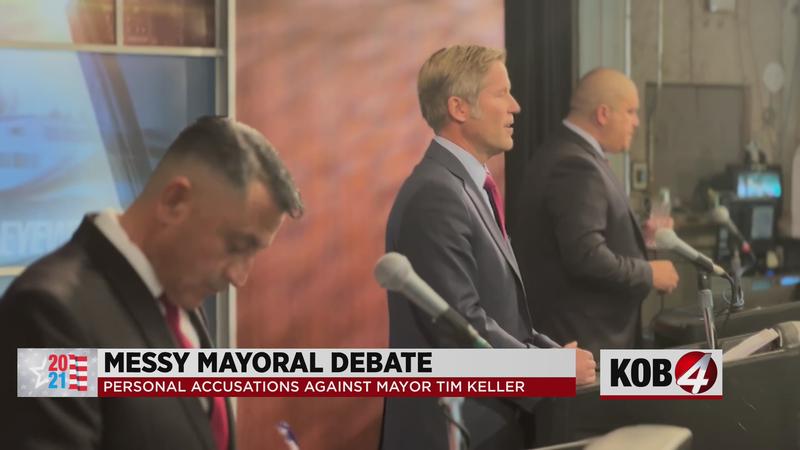 As for the other allegations, the Albuquerque Police Department said it has not covered up a DWI.

Keller: What a disgusting, pre-prepared question you just read was.I mean, let’s first off, be clear, I mean, I don’t even kow where to begin other than that I have never been involved in any of the incidents you just mentioned.

In addition to denying the allegations, the Keller campaign is planning legal action.

In a statement, the Keller campaign said, "We’re appalled by these tactics but not surprised that Manny is so desperate, with no record to run on, that all he has is internet conspiracy theories. We are pursuing legal options against these defamatory claims."

The Gonzales campaign responded and said, in part, "We welcome Keller filing a lawsuit and are ready to start taking depositions under oath tomorrow, starting with the mayor’s. The truth is an absolute defense against slander claims and we look forward to proving the truth through the legal discovery process."

Notably, Keller’s campaign manager notified KOB 4 staff that Gonzales met with a campaign staffer during a commercial break and took a pre-prepared note into the studio. If that is true, it would violate the rules candidates agreed to prior to the debate. When these allegations were made, KOB 4 management spoke with the debate moderators and staff, but none of our staff saw Mr. Gonzales take the note into the studio.

After the debate ended, Keller and Gonzales got into a verbal altercation inside the studio. Keller demanded Gonzales apologize to his wife for the remarks he made. Gonzales responded by saying he has no respect for the mayor.

Gonzales to Keller: Where is your accountability? There are serious misconduct allegations at City Hall under your watch – allegations of your own domestic violence incident covered up by high-ranking city officials. pic.twitter.com/2774w9GI4W